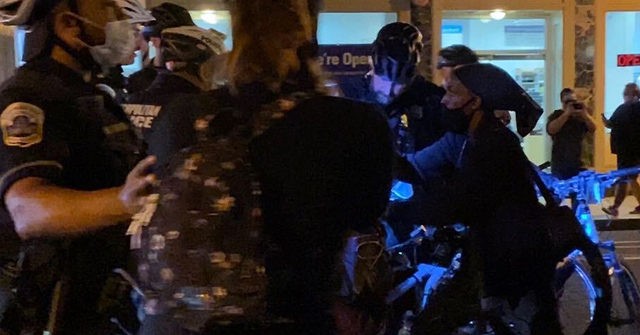 WASHINGTON, D.C. — About 200 protesters in Northwest Washington, D.C., took to the streets Wednesday night to protest the verdict on police officers involved in Breonna Taylor’s shooting, breaking businesses’ windows, shouting at diners seated on patios, and scuffling with police officers.

Breitbart News witnessed the swarm of protesters, some carrying megaphones, marching through the Adams Morgan neighborhood, with dozens of police officers on bicycles and in vehicles following from behind.

Protesters turned over newspaper stands and tried to place obstacles between them and the police, or stop them with their own bikes, and would occasionally turn around and confront the advancing police officers.

At one point, a white man in a maroon shirt and beige shorts — who had repeatedly turned around and engaged with the police officers — held up a skateboard in front of their faces as a woman next to him screamed at a black police officer: “Shame on you! You should be out here with us!”

After a brief scuffle, the police arrested the man in the maroon shirt. He sat on the floor and yelled, “Why am I being arrested?”

Black woman screaming at black police officer: “Shame on you! You should be out here with us!” Dude next to her holding skateboard later gets arrested. pic.twitter.com/dHtfVMLbyR

The moment the dude holding the skateboard in the police officers’ faces goes down: pic.twitter.com/AUK4XO4IQG

Dude who refused to listen to police and move back on the ground asking, “Why am I being arrested?” pic.twitter.com/XdywIHZXri

They also protected businesses along the protesters’ route. One protester with a megaphone mocked the officers: “Look at yourself! You’re protecting McDonald’s, you’re an idiot! [Inaudible] you’re protecting property and corporations!”