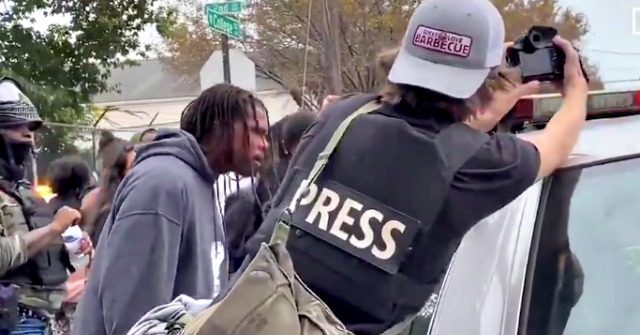 Protesters rushed to the streets of Louisville, Kentucky, following a grand jury issuing no murder charges in Breonna Taylor’s death, shouting, “burn it down!” following the news.

The grand jury indicted one officer involved in the March raid with three counts of wanton endangerment, but there were no murder charges, spurring protests in the streets. Many of the protesters appeared prepared for demonstrations, unloading gear from a U-Haul truck.

“We didn’t get it, burn it down!” protesters shouted as they marched through the streets. Others encouraged residents to raise their fists into the air in solidarity:

“We didn’t get it, burn it down!” The crowd continues to grow out here in Louisville this afternoon #Louisville #BreonnaTaylor pic.twitter.com/m4nHrbPvJC

As the BLM crowd chanted, “If we didn’t get it, burn it down!” they have marched outside the barricaded zone in Louisville and have shut down traffic in an intersection. pic.twitter.com/cIUtveA7xV

“We need your fists in the air” woman yells to nearby residents #Louisville pic.twitter.com/PeYwjqCkg0

Hundreds of people are marching through the streets of #Louisville . The city has planned for civil unrest due to the #Breonnataylor announcement earlier today pic.twitter.com/Fwlfo06U2R

People from the crowd shout at those standing outside their homes but not actively participating in the march.

The large crowd — I’d estimate several hundred — are resting at an intersection. They’re regrouping and getting organized. Shields to the front, as we’ve seen before: pic.twitter.com/QX1khyLLnj

Some families are bringing their kids outside in front of their houses to watch the protesters as they march through #BlackLivesMatter #Louisville pic.twitter.com/BcFoM1UrMY

Dancing in the middle of the streets #Louisville pic.twitter.com/5ucvijXh7P