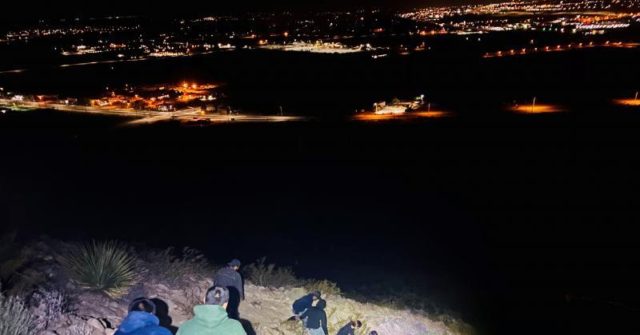 Officials report the lack of border walls in the region and the natural concealment characteristics of the Mt. Cristo Rey region make for prime opportunities for the human smuggling operations of Transnational Criminal Organizations. “The treacherous terrain through this mountainous area also poses many dangers for migrants,” officials said in a written statement.

Agents worked all of the independent smuggling attempts and apprehended 63 migrants. The migrants came to the U.S. from multiple countries including Cuba, Ecuador, and Honduras. Agents report migrants from “several other nations.”

Indicative of the dangers of these types of smuggling operations, Border Patrol agents provided first aid to one of the people who sustained an injury from crossing through the “treacherous terrain,” officials reported.

“The hazardous terrain of Mt. Cristo Rey and its surrounding area continues to be exploited by Transnational Criminal Organizations,” stated El Paso Sector Chief Patrol Agent Gloria I. Chavez. “The limited visibility during the hours of darkness and the steep terrain increases the risk of injuries for migrants exploited by smugglers that have complete disregard for human safety.”

Through the first 11 months of Fiscal Year 2020, which began on September 1, 2019, El Paso Sector agents apprehended 46,455 migrants who illegally crossed the border between ports of entry. Single adults made up the largest portion of these illegal immigrants (32,309). Family Unit Aliens accounted for 10,075 of the balance while Unaccompanied Alien Children filled out the numbers at 4,171, according to the CBP’s August Southwest Border Migration Report.