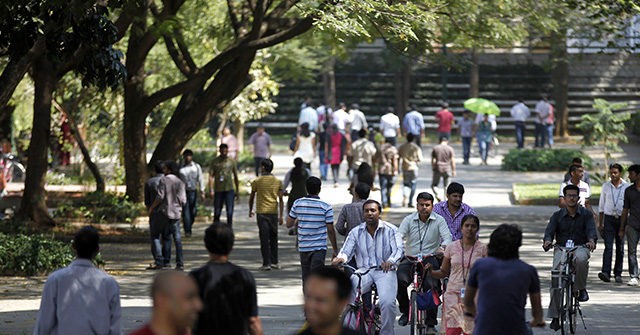 Business groups, labor brokers, and migration advocates are protesting a draft regulation that would open up many thousands of outsourced white-collar jobs to debt-burdened U.S. graduates.

The regulation would put a four-year limit on the F-1 student visas, instead of the current lax rules which allow unsupervised and unlimited stays. Many foreigners use the lax rules to overstay their visas and to work for many years illegally in white-collar jobs, often in Fortune 500 gig-worker jobs that are needed by U.S. graduates to launch their careers.

“The foreign graduates are in competition with American graduates for jobs, and industry likes this because it is yet another source of labor,” said John Miano, a lawyer with the Immigration Reform Law Institute.

There is no reliable data about the resident number of white-collar overstays, Miano said. “Deliberate ignorance has been part of the [government’s] political strategy” to hide the economic impact of the legal and illegal white-collar foreign workers in the United States, he said.

For example, the officials do not have an accounting that would count the number of H-1B visa workers in the United States, he said. In 2020, DHS estimated a resident population of roughly 600,000 H-1B workers, he said, adding that his estimate is roughly one million H-1B.

U.S. graduates have seen fewer wage gains in recent years, partly because many CEOs prefer to outsource hiring to many large and small subcontractors. In turn, the unsupervised subcontractors hire and fire an ever-shifting mix of visa workers and Americans for a variety of no-benefits gig-worker jobs.

Indian immigrants tell Breitbart News that many subcontractors hire overstay illegals to fill the outsourced Fortune 500 jobs. These migrant gig-workers often work for sub-minimum wages because they hope to eventually win the green cards that are dangled by Congress and employers.

The new rules also include the J-1 visas that are used by many universities to import “scholars” and “Postdocs.” In reality, these foreigners work as cheap laboratory workers, technicians, and teachers in the jobs needed by the many American graduates who have paid tens of thousands of dollars in tuition to those universities.

The presence of these many legal and illegal foreign workers ensures a loose labor market where employers never have to compete against each other for U.S. graduates, for example, by offering full-time employment, benefits, and decent wages.

Many CEOs also prefer visa workers because the workers are compliant and disposable. For example, the workers are employed and swapped by a dizzying variety of subcontractors who can move blocs of labor from one city to the next, to fill short term contracts, with little notice or compensation to the disposable workers.

Most of these green card workers are also part of the U.S.-India Outsourcing Economy. The outsourcing economy allows U.S. investors to boost stock values by hiring blocs of cheap Indian graduates for U.S. jobs, and by moving jobs to India after Indians are trained by Americans who were doing the jobs.

Many of the investors who gain from this cheap labor are part of FWD.us, a D.C.-based advocacy group that works with the universities to preserve the labor pipelines. Todd Schulte, the director of FWD.us, denounced the drat rule:

This is intended to radically reduce ability of US universities to be top destination from around the world. To purge higher ed of people not born in the US.

Eliminating US preeminence in higher education eliminates a pillar of America’s fortunes for over a century. Awful stuff. https://t.co/ew5OnuMDoi

The draft curbs are also opposed by the labor brokers who import foreign workers for the Fortune 500.

“This proposed rule is stunningly bad for the U.S.,” said Greg Siskind, who imports foreign graduates for U.S. healthcare jobs.

“This is a disaster,” said a tweet from an advocate for Indian migration. “Students will no longer want to come to U.S.”

The new rules say that foreign with F-1 visas can only stay for four years, and may not get an extension, he said. If the foreigner overstays their visa, they will trigger the so-called “3/10 rule,” which bars illegals from reentering the United States for three or ten years. That is a big deterrent to foreign graduates, many of whom hope to return to the United States for work or migration.

The curbs are tighter for some foreigners. For example, foreigners from chaotic countries, or who get F-1 visas to attend unaccredited “visa mill” colleges, or who come to study English, can only stay for two years.  That two-year rule is likely intended to choke the flow of Indian workers who are using colleges and the F-1 visas to get jobs.

“I held a student visa for a four-year degree,” said Akbar Shahid Ahmed, a Yale graduate, an accomplished foreign affairs reporter for the Huffington Post, and an immigrant from Pakistan. He continued:

It gave me a year to work afterwards too–which let me establish skills & a record that got me a pathway to another visa. Trump wants to destroy that route for millions of other people who want to contribute to this country.

“The rule would make [the overstay problem] worse,” said David Bier, a migration advocate at the Cato Institute. “By imposing the 3-10-year bars on F overstays, it would increase the number of illegal immigrants who have no reason to ever leave the country since they’d have no way to legally return,” he told Breitbart News.

If Trump loses his 2020 campaign, the draft rule will likely be dismissed by Joe Biden, who is promising a high-migration, low-wage labor policy favored by Wall Street and by Democratic elites in New York and California.

In contrast, Trump promises a “pro-American Immigration ” policy that is likely to boost wages and the workplace status of U.S. professionals. Under Trump, the inflow of foreign graduates is declining, so improving career prospects for U.S. graduates.

2019 was such a good year for wage earners that per-household income rose by almost 7%, even as wages rose by just a little over 2%.
That won’t happen again if businesses and progressives get to import even more workers. https://t.co/gHlh42iUcd