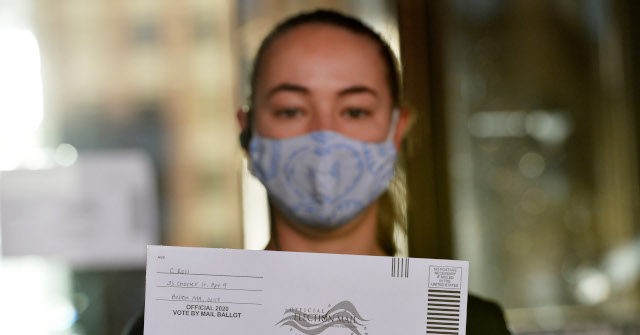 The Department of Justice on Thursday ordered Luzerne County, Pennsylvania, to modify its practices after several military ballots were found discarded.

The issue surfaced earlier in the day when the DOJ announced that it had recovered a small number of discarded ballots. While the Justice Department would not say where they had found the ballots, they did say there were nine recovered — seven of which were cast for President Trump, while the other two were sealed by Luzerne County before the FBI recovered them. In his letter to Luzerne County officials, U.S. attorney David Freed indicated that additional ballot materials were found in a dumpster. Freed said their investigation yielded “troubling” findings, including that the county allegedly improperly opened ballots. […]

On Monday, Luzerne County District Attorney Stefanie Salavantis requested the investigation, which involves cooperation with the FBI and the U.S. Attorney’s Office.

“Even though your staff has made some attempts to reconstitute certain of the improperly opened ballots, there is no guarantee that any of these votes will be counted in the general election,” Freed wrote. “In addition, our investigation has revealed that all or nearly all envelopes received in the elections office were opened as a matter of course.”

Freed continued: “It was explained to investigators the envelopes used for official overseas, military, absentee and mail-in ballot requests are so similar, that the staff believed that adhering to the protocol of preserving envelopes unopened would cause them to miss such ballot requests. Our interviews further revealed that this issue was a problem in the primary election–therefore a known issue–and that the problem has not been corrected.”

“While the assigned investigators are continuing their work including reviewing additional discarded materials, it is imperative that the issues identified be corrected,” he added.

The letter comes after U.S. Postal Service officials launched an investigation after trays of mail, which included absentee ballots, were discovered Tuesday in a ditch in Greenville, Wisconsin.

In a statement to the Washington Examiner, the sheriff’s office said the “mail [was] going to the post office.”

“The United States Postal Inspection Service immediately began investigating and we reserve further comment on this matter until that is complete,” said USPS spokesman Bob Sheehan.

On Monday, a federal judge ruled that the Postal Service must prioritize election mail.

“The right to vote is too vital a value in our democracy to be left in a state of suspense in the minds of voters weeks before a presidential election, raising doubts as to whether their votes will ultimately be counted,” stated U.S. District Judge Victor Marrero.

“Conflicting, vague, and ambivalent managerial signals could also sow substantial doubt about whether the USPS is up to the task, whether it possesses the institutional will power and commitment to its historical mission, and so to handle the exceptional burden associated with a profoundly critical task in our democratic system, that of collecting and delivering election mail a few weeks from now,”  the judge added.

President Donald Trump has repeatedly warned of voter fraud associated with voting by mail, saying it “doesn’t work out well for Republicans.”

“Republicans should fight very hard when it comes to state wide mail-in voting. Democrats are clamoring for it,” the president once tweeted. “Tremendous potential for voter fraud, and for whatever reason, doesn’t work out well for Republicans.”