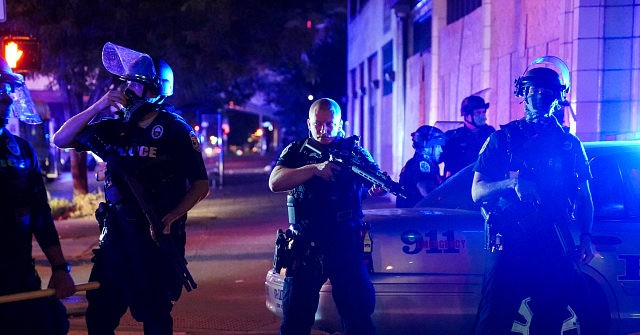 “The Democrat party’s war on cops is putting the lives of innocent police officers in danger,” Trump said at a campaign rally in Jacksonville, Florida.

Two Louisville Metro Police Officers were shot on Wednesday night during violent protests reacting to the grand jury verdict in the Breonna Taylor case. Both were hospitalized but are in stable condition.

Trump criticized Democrats’ lack of respect for police and their support for ongoing protests fueled by the leftist group Black Lives Matter.

The president recalled that his father had “great respect” for police officers and told him when he was young not to use the word “cop” but the world “police” instead.

“I always find it a little hard, it just left an impression … he thought it was slang, and I don’t think they mind,” he said.

“Do they mind that term? Cops?” Trump continued. “No. They just want respect, and they just want to be allowed to do their job properly as nobody can do it. … that’s what I say.”

The president said police officers were heroic, and routinely sacrificed themselves to provide public safety.

The crowd chanted “Back the Blue!” and gave police officers a standing ovation.

“I tell them all the time, you don’t know how much they’re loved,” Trump said. “You know they don’t hear it because they watch the fake news at night.”

Trump’s comments about the media prompted the crowd to repeatedly chant “CNN SUCKS!”