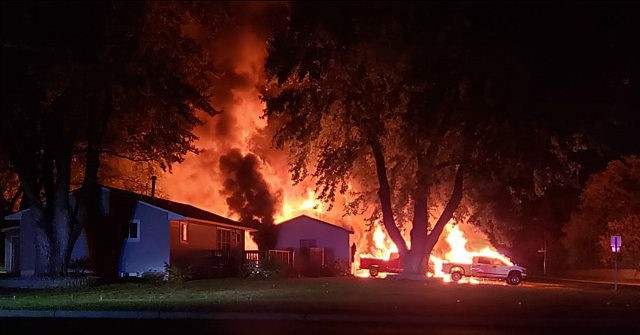 A home belonging to supporters of President Donald Trump in Brooklyn Center, Minnesota, was attacked in the early hours of Wednesday morning, according to a Facebook post. A news release from the Brooklyn Center Police Department noted that the home’s occupants had a “fairly large ‘Trump 2020’ sign that was destroyed.”

Deana Molla, who claims to be one of the owners of the vandalized home, shared photos of the arson and vandalism via Facebook. According to police, the attackers spray-painted, “Biden 2020,” “BLM,” and a capital letter “A” with a circle around it, a symbol for the left-wing group Antifa.

Local police and firefighters rescued three dogs in kennels and four puppies located in a garage, which was burned down by the arsonists. The Brooklyn Center Police Department issued a statement related to the incident and its associated investigation:

Just before 4:00 am, Brooklyn Center police officers and firefighters were dispatched to the report of an explosion and fire in the area of 69th Ave N and Morgan Ave N in Brooklyn Center. Officers located a fire at a residence in the 6900 block of Morgan Ave N. Firefighters quickly extinguished the fire, but not before a detached three car garage and three vehicles were destroyed. There was minor damage to the house. There were no injuries during this incident. Officers and firefighters were able to save the three dogs in kennels and four puppies located in the garage.* This fire is considered suspicious and our investigation remains extremely active. The home occupants had a fairly large “Trump 2020” sign that was destroyed, and our officers observed what appeared to be fresh spray paint on the garage before it burned down. The spray paint included “Biden 2020”, “BLM” and capital letter “A” with a circle around it.

The Minnesota Arson Reward Project – IAAI – is offering rewards of up to $5,000 for information leading to the identification of persons responsible for this fire.

Powerline wrote of the attack, “Not all the facts are in on this incident, obviously. It could be that the arson was committed by someone other than BLM/Antifa. But when those groups vow to burn down America, it is not surprising that many people find credible the possibility that they have done just that.”