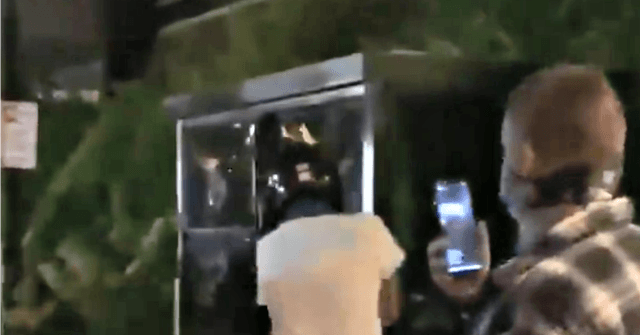 Protesters descended on Louisville, Kentucky, for the second night Thursday after it was announced Wednesday that no police officers would be charged directly for Breonna Taylor’s death.

Courier-Journal reporter Sarah Ladd shared photos of protesters giving police the middle finger and motorcyclists raising their fists in solidarity with the marchers:

Washington Post staff writer Robert Klemko shared photos of what appeared to be the structure and said it was a valet booth:

Just before 8:00 p.m., the Louisville Metro Police Department (LMPD) tweeted that an unlawful assembly had been declared after rioters broke windows on 4th Street:

An Unlawful Assembly has been declared due to protesters breaking windows on 4th Street. Follow us on Facebook to watch our live! #LMPD

At 8:00 p.m., Ladd shared a photo of a broken window at a library and what appeared to be a flare on the floor inside:

Broken glass and flare inside library on third pic.twitter.com/J8EeDvKBLQ

A county-wide curfew was announced Wednesday for the next 72 hours between 9:00 p.m. and 6:30 a.m., according to the LMPD’s twitter page.