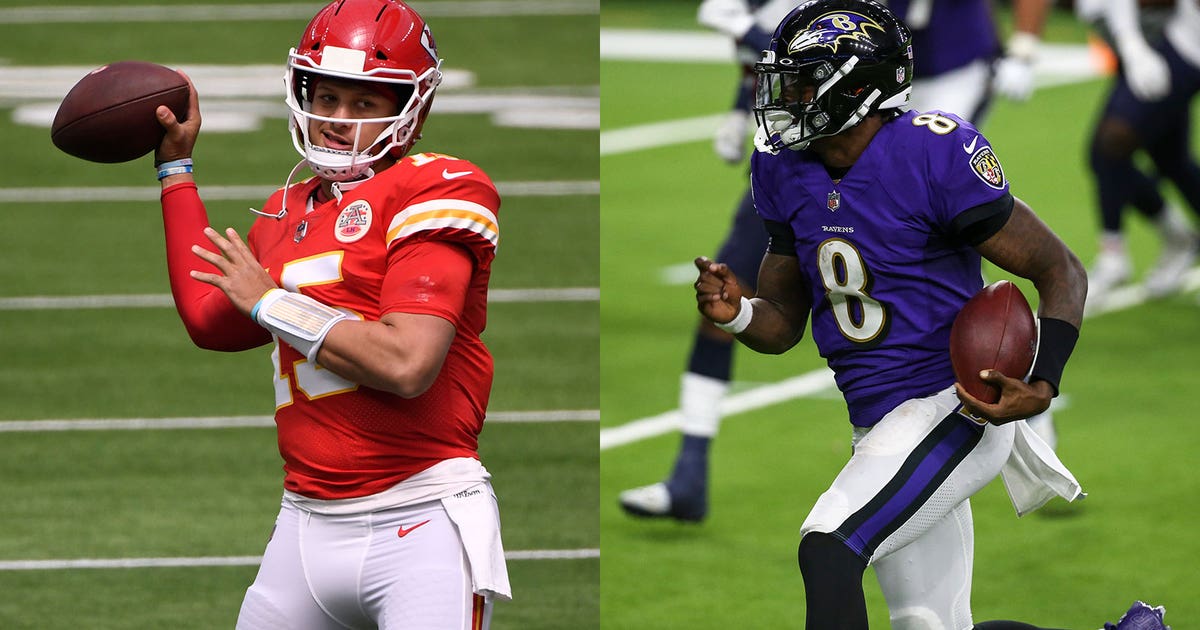 Or, maybe it’s a preview of the AFC title game — a matchup many expected to see last January. Most of all, the intrigue surrounding Monday night’s game between the Kansas City Chiefs (2-0) and Baltimore Ravens (2-0) is directed at the quarterbacks: 2018 NFL MVP Patrick Mahomes and 2019 MVP Lamar Jackson.

“When those two quarterbacks are on the field, it’s magic on both sides,” Ravens cornerback Marlon Humphrey said. “I see every week what Lamar can do, and I always see some highlight or something of what Mahomes can do. So, when you have two superstar quarterbacks like that, it’s going to be a fun game.”

Mahomes last season led the Chiefs to their first NFL championship since 1970 and was the Super Bowl MVP. Jackson guided the Ravens to a 14-2 regular-season record, set the league mark for yards rushing by a quarterback and directed the most prolific running attack in NFL history. Baltimore closed the regular season with 12 straight wins to earn the top seed in the AFC, but bowed out with an upset loss at home to Tennessee.

That helped Mahomes and the Chiefs to go the distance, and they’ll be bringing an 11-game winning streak into Monday night’s showdown.

Jackson is 21-3 as a starter during the regular season, with two of those losses coming against Kansas City and Mahomes in 2018 (27-24 in overtime) and 2019 (33-28). But, even though this is the first game in NFL history featuring two MVPs under the age of 26, Jackson waved off the notion that this is solely about him versus Mahomes.

Oh, there’s plenty of reason for the Baltimore defense to be concerned, even though the unit has been exceptional thus far in lopsided wins over Cleveland and Houston. Mahomes threw for 377 yards and two TDs in that 2018 game, and last year he pierced the Ravens for 374 yards and three scores.

“He has all these tools, and he has so much talent around him,” Humphrey said. “With Mahomes, as good as he is in the pocket, he’s just as good — probably better — outside the pocket, which is the craziest thing about his game. So, preparing for him, it’s really tough.”

Not only does this game feature two of the league’s best quarterbacks, but two of the finest kickers will be ready to roll if a late field goal try is required for the win.

Kansas City’s Harrison Butker banged home two field goals of 58 yards last week in an overtime win over the Chargers. He’s been perfect so far this season, led the league in scoring last year and has amassed 445 points in his career, most ever by a kicker after 47 games.

The Ravens have been waiting since 2017 to have a Monday night game at home, and now that they got one, they’ll be forced to play without the backing of their fans. Attendance will be zero because of the pandemic.

So, the Ravens won’t enjoy the advantage the Chiefs had while playing at home against Baltimore in each of the past two seasons. This will be the third straight game for the Ravens without fans in the stadium.

“It’s weird,” Chiefs coach Andy Reid said. “I’ve been doing this a couple weeks now and you get out there and it seems like you can hear every penny drop.”

One of the problems the Kansas City offense has faced through the first two games of the season has been defenses that have showed completely different looks from the past. Teams that have run man coverage have gone to zones, and the blitz looks that Houston and Los Angeles have used in the past have been replaced — all in an effort to confuse Mahomes.

Expect the Ravens to do the same thing given how much they’ve played each other the past few years.

“It’s going to be all about execution,” Mahomes said. “When you play a defense like this that’s very mobile, multiple, you have to be ready to go and have answers for everything. Whenever they give us an un-scouted look, try to have a positive gain, go to the sideline and try to figure it out.”

Without much offseason or any preseason games, and limited hitting to practice it, tackling has been a problem for the Chiefs this season. They know how important it will be against the mobile Jackson and the Ravens’ productive ground game.

“Coach Reid did an unbelievable job in camp trying to make things normal,” defensive tackle Chris Jones said, “but we just have to stay on that. We missed a lot of tackles last week and that’s a big focus this week, wrap up and finish plays.”