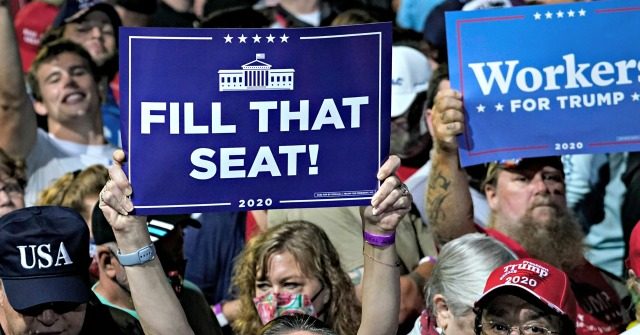 President Donald Trump on Friday said leftist Democrats were furious that he was getting three Supreme Court nominations during his first term as president.

Trump plans to announce his nominee on Saturday, already reported to be Judge Amy Coney Barrett. The president did not confirm the reports but again said that he would pick a woman to replace Ruth Bader Ginsburg, who passed away last Friday.

The crowd repeatedly chanted “Fill that seat!” as the president spoke about his upcoming decision.

“We have the right, we won the election,” Trump said. “And we have a lot of time, and if they were in our position, they would do the same thing.”

Trump said that choosing a Supreme Court nominee was considered the “single biggest thing a president can do” and said he wanted his choice to be confirmed before the election.

He acknowledged that the Democrats and the left would not be looking forward to his announcement.