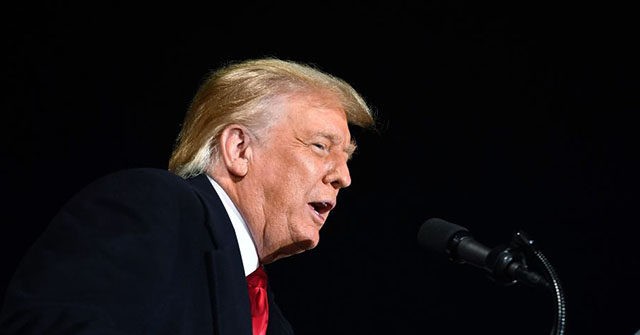 9:05 PM: Trump says he was told not to go for Virginia and he says he said: “Why not?” Trump talks about the state’s “crazy governor.”

Trump says based on the governor who wants to take away guns, he said “let’s give Virginia a shot.”

9:03 PM: Trump says this is the most important election in the country’s history and immediately brings up gun control in Virginia.

“If Sleepy Joe Biden is elected, your Second Amendment will be eliminated and your firearms will be confiscated, whether you like it or not,” Trump says.

Trump says Biden vows to impose “punishing taxes” on gun owners and “wage the most aggressive war on gun rights in U.S. history.” Trump says Biden will disarm law-abiding Americans while there will be riots down the streets.

He says only by voting for him can you save the country and the Second Amendment.

9:01 PM: Trump begins his rally in Virginia as a poll released this week found Trump getting 14 percent support among black voters in the state. Trump said he is familiar with Newport News and did work there for his father. Trump also thanks “the great people from North Carolina” and asks if anyone is here from North Carolina.

8:59 PM: Trump about to address the audience.

Air Force One pulls up to the airport rally at Newport News/Williamsburg Airport. Though he lost in Virginia in 2016 and is running behind in the polls now, Pres Trump not giving up on the Old Dominion. It’s his first campaign rally in Virginia this year. pic.twitter.com/OJJTiGOBrb

“The road to victory runs right through the Tidewater.” – @vp @Mike_Pence

The end of the prayer here at the #MakeAmericaGreatAgain Rally in Newport News, Virginia. President Trump due to speak around 9am.@WTKR3 https://t.co/z403J6yOPy pic.twitter.com/fTn8WBikKg

Outside of the Trump rally entrance in Newport News. pic.twitter.com/e4d6H6Epoo

#FuckDonaldTrump757 let’s make the hashtag trending. We will be at the airport well before 7:57. Wear all black and #BLM attire #BLM757 #BlackLivesMatter #BlackLivesMatter757 pic.twitter.com/Y3quAzaDIN

A group of protesters wearing all black just walked through the crowd trying to get in. pic.twitter.com/FSOEG7qDSf

At least two thousand people waiting in line 2 hours before doors open here at the #MakeAmericaGreatAgain rally in Newport News with President Trump. Hard to see but the line stretches way out of this picture, and more showing up every minute.@WTKR3 https://t.co/z403J6yOPy pic.twitter.com/2gJWXIqAxq

Loud cheers as a group of police officers walk toward the site where President Trump will be holding a #MakeAmericaGreatAgain rally here at the Newport News-Williamsburg International Airport.@WTKR3 https://t.co/z403J6yOPy pic.twitter.com/US9vsyHJIX