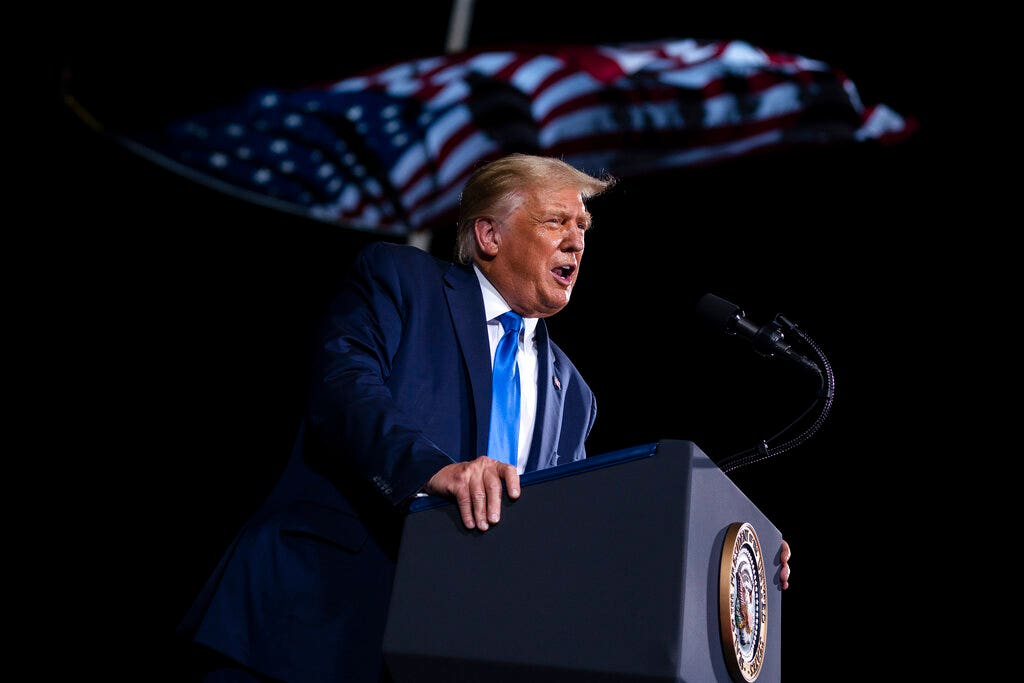 President Trump took his stump speech into a key “purple” state Friday, telling Virginians their Gov. Ralph Northam represents the kind of governance they’ll get on a national scale if they vote for Democratic presidential nominee Joe Biden in November.

The president also argued that by backing Northam, a physician who supports late-term abortion, Biden had backed the governor’s opposition to life-saving medical care for infants born alive after abortions — as well as Northam’s pro-gun control agenda. Although Biden campaigned with Northam in 2017, he later called for the governor’s resignation in response to photos that allegedly showed Northam in blackface.

According to the Virginian-Pilot of Norfolk, hundreds of people attended Friday’s rally, for which doors opened at 6 p.m. ET, although people started lining up long before that. Trump’s comments came just after he signed an executive order ensuring that federally funded programs and facilities provided care for infants, and as he was expected Saturday to nominate a pro-life justice to the Supreme Court — a controversial decision that will likely enrage the left and rally his base.

“They say the biggest thing you can do is the appointment of judges, but especially the appointment of Supreme Court justices. That’s the single biggest thing a president can do because it sets the tone of the country for 40 years, 50 years — I mean a long time,” said Trump, whose expected nominee would succeed the late Justice Ruth Bader Ginsburg.

“If given the power, the radical left will pack the Supreme Court with extremists who will strike the words ‘under God’ from the Pledge of Allegiance,” he said. The president went on to describe Biden as a “weak” nominee who “surrendered” his party to radicals.

“If given the power, the radical left will pack the Supreme Court with extremists who will strike the words ‘under God’ from the Pledge of Allegiance.”

During his speech, Trump also pledged to extend to North Carolina and Virginia an off-shore drilling moratorium he approved for Flordia, Georgia, and South Carolina — something state Democrats requested earlier in the week, according to the Eastern Shore Post.

Generally viewed as a purple state, Virginia backed former Democratic presidential nominee Hillary Clinton by 5 percentage points over Trump in 2016. According to RealClearPolitics in FiveThirtyEight, former Vice President Biden has consistently led Trump in polling from the state. As of Friday, the Democratic nominee enjoyed an average lead of 11 percentage points, according to RealClearPolitics.

Prior to the event, Virginia’s public health department sent a letter warning that the rally could be risky given the ongoing coronavirus pandemic.

Dr. Natasha Dwamena, a Department of Public Health district director, told the company leasing the hangar that the expected 4,000 attendees would violate Northam’s executive order generally banning gatherings of more than 250 people. She said the rally should be canceled, rescheduled or scaled down to comply with the governor’s order.

“The rally poses a concerning public health risk,” Dwamena said in the letter, which was addressed to the private company that leases the hangar where the rally is set to take place.

Northam’s top health and transportation aides also sent letters Thursday to airport officials around the state reminding them that they have “the authority to enforce” the state’s laws.

John Fredericks, a conservative radio host and chairman of the Virginia delegation for the Trump campaign, said Democrats were trying to block the rally for political reasons. “Panic has set in amongst Virginia Democrats,” Fredericks said.

Despite receiving similar criticism in the past, the Trump campaign has held multiple rallies during the pandemic. In an email Friday, the campaign described the gathering as a peaceful protest — echoing widespread criticism that the media and Democrats seemed to apply a double standard to left-leaning events.

“As President Trump peacefully protests with supporters in Newport News, the evidence shows his whole-of-government response to the coronavirus helped Virginia families and worker,” the campaign email read.

Trump’s campaign has insisted it takes appropriate health precautions, including handing out masks and hand sanitizer and checking the temperatures of rallygoers.

The Associated Press and Fox News’ Paul Steinhauser contributed to this report.