Tory Lanez finally broke his silence about allegedly shooting Megan Thee Stallion, but only in song — he dropped a new record that includes a full denial.

The rapper released a 17-track album Thursday night called “DayStar,” and nearly every song seems to be about the altercation with Megan back in July when they were out partying with Kylie Jenner in the Hollywood Hills.

Megan has accused him of shooting her, but Tory’s basically calling her a liar on his opening track, “Money Over Fallouts.” The lyrics include, “How the f*** you get shot in your foot, don’t hit no bones or tendons?”

He continues … “How the f*** your team is trying to pay me in some whole millions? /  I just lost like 10 million dollars because this cold business  / But I got like 10 million followers that’s gon’ roll with me /  Fans that support me because they know my heart.”

Along with poking holes in Megan’s account of what went down between them on July 12, he suggests she’s been influenced to lie about him. On other tracks, he hints that he hopes to speak with Megan again and even reconcile … but also that he’s moved on with a new GF.

Tory’s new album also addresses rumors Kylie was the reason he and Meg were fighting that night — a theory Megan’s firmly denied. Still, Tory raps, “Me and Kylie still off in the pool / We was chilling, kicking s**t was cool / Both of us didn’t know you was tripping / Even though I got a crush on Kylie, I woulda left with you if I knew you was dipping, for the simple reason / You invited me, but I can’t act like shawty didn’t excite me.”

Earlier Thursday, Tory apologized to his fans for his silence and implied he’d be opening up about things at 9 PM PT — when his album dropped. Many thought he’d own up to shooting her and apologize. He went in the other direction. 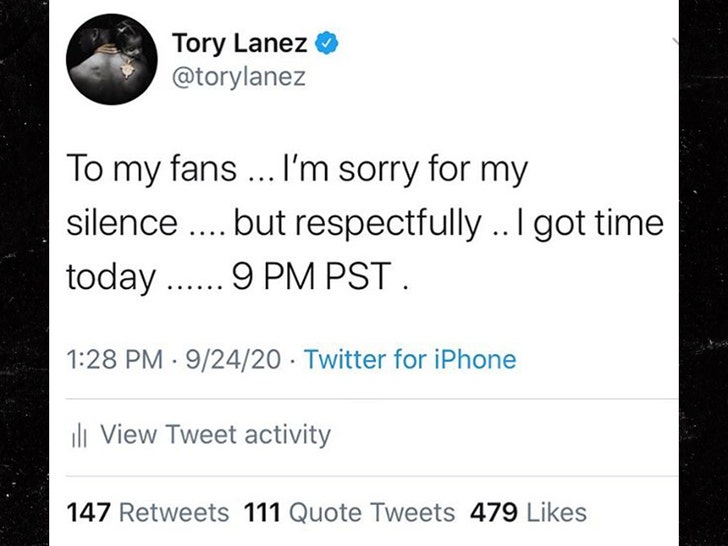 After weeks of speculation and uncertainty about what went down back in July before police swarmed Megan and Tory’s SUV and she walked out with bloody feet … Meg flat-out accused Tory of shooting her in an August 20 video, stating she was tired of the lies from his side.

Megan said the 2 of them — along with her friend and Tory’s driver — were all arguing in the vehicle after leaving Kylie’s house in the Hills after 4 AM, and she tried to get out and walk home. That’s when she alleges Tory started shooting at her out the window, hitting her feet.

As we’ve reported … Tory was arrested for possession of a concealed weapon — a handgun was under his seat — and Megan was taken to a hospital and treated for a “gunshot injury.”

Though Tory’s finally broken his silence publicly on the incident, TMZ previously learned he’d texted Megan an apology about 15 hours afterward, saying … “I know u prolly never gone talk to me again, but I genuinely want u to know I’m sorry from the bottom of my heart.”

He didn’t admit to shooting her, but added as his only explanation for his actions … “I was just too drunk.”