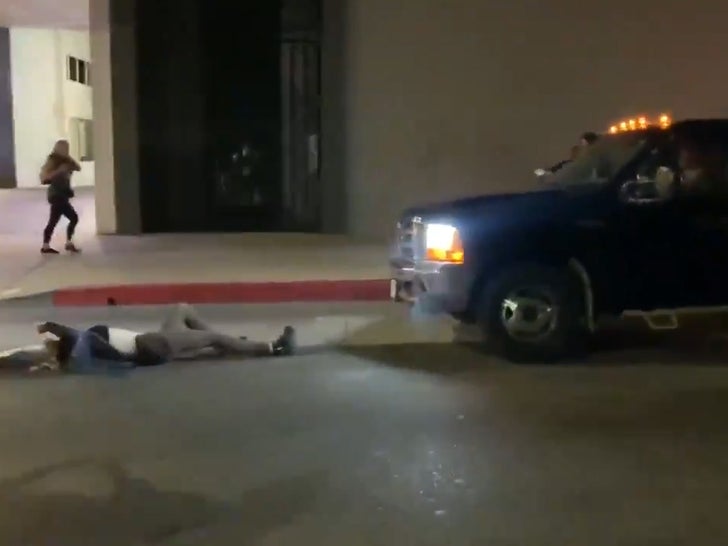 LAPD is searching for the psycho who drove through a crowd protesting the Breonna Taylor grand jury decision … sending at least one person to the hospital,

Law enforcement sources tell TMZ … the terrifying incident went down Thursday night around 9 PM after protesters had gathered at the Hollywood Forever Cemetery.

Video of the incident shows the crowd chanting, “No justice, no peace” when, out of nowhere, the pickup truck plows through and slams into one person who was violently thrown back onto the road. Protesters quickly swarmed the truck, banging on it to make the driver stop … but they fled down Sunset Blvd.

We’re told the driver — who’s been ID’d, but not yet arrested — claimed they were trying to escape after being attacked. Police are now investigating to see if the driver was genuinely the victim of an assault or a hit-and-run suspect. As for the protester who was hit … we’re told he was taken to the hospital with non-life-threatening injuries.

A car just ran through a protest in hollywood.

A photojournalist told the Los Angeles Times the truck was traveling against the flow of the crowd and definitely instigated the incident.

Police are also investigating a separate incident … after cops say a white Toyota Prius tried to drive around the same protest.

WATCH: A person driving a white Prius was chased down and by protesters after trying to drive through the crowd in #Hollywood. The group that chased the driver began hitting the car and possibly broke a window. @RoadSageLA was overhead in #Sky9 as it happened. #CBSLA pic.twitter.com/OYFMOezUpx

Cops say an altercation ensued after a black truck chased after the Prius and brought it to a halt but was later able to get away. Cops say that driver was also ID’d, but no one was injured.