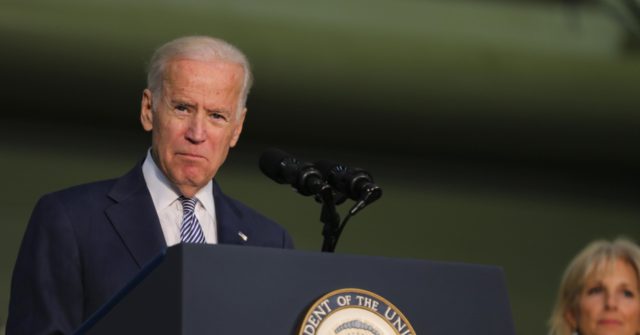 Former Vice President Joe Biden jokingly referred to members of the U.S. military and its overseas coalition partners as “stupid bastards” while making banter with troops during a 2016 trip to the United Arab Emirates.

Biden, who was in his final year in office, traveled to the Middle East in March 2016 as part of an effort to shore up the Obama administration’s position in the region. During the trip Biden delivered an address to members of the 380th Air Expeditionary Wing stationed at the Al-Dhafra Air Base near Abu Dhabi, the capital of the United Arab Emirates.

As part of the visit, Biden was introduced by 1st Lt. Karen Johnson of the 380th’s Expeditionary Aircraft Maintenance Squadron. Given that Lt. Johnson was a native of Delaware and had secured her appointment to the U.S. Air Force Academy through Biden’s former Senate office, the vice president tried to use that history as a means to break the ice with the more than 1,000 service members present.

“Notwithstanding what you may hear about me, I have incredibly good judgment,” Biden said. “One, I married Jill and two, I appointed Johnson to the academy.”

“I just want you to know that, so clap for that you stupid bastards,” Biden added to laughter from the crowd. “Man, you all are a dull bunch. It must be slow here, man.”

Later in the speech, Biden praised the armed service members as the “finest generation of warriors the world has ever, ever known.”

At the time, Biden’s jokes received little attention. The only portion of the address that made national headlines, in fact, was a vow that Biden made to the troops, promising that the U.S. military would “squeeze the heart” out of then-burgeoning Islamic State of Iraq and Syria (ISIS).

When videos of Biden’s jokes first reappeared on Friday, a number of individuals took to social media to castigate the former vice president, arguing his attempt at banter was inappropriate.

Joe Biden had a Jeb Bush moment, but instead of saying “please clap,” he said “CLAP FOR THAT YOU STUPID BASTARDS!”

This was to men and women in uniform… pic.twitter.com/W8gYEgBvEL

Biden’s campaign confirmed the authenticity of the video and the remarks to the Washington Examiner on Friday.

“Vice President Biden was jokingly encouraging the audience to clap for an airwoman on the stage, and a number of service members can be seen laughing and smiling at the comment,” Andrew Bates, the Biden campaign’s director of rapid response, told the outlet.

“Seconds before, he praised them for ‘the incredible sacrifices [they] make for our country.’ He thanked them for their patriotism and courage throughout, and closed his remarks by saying, ‘you’re the finest generation of warriors the world has ever, ever known’ – receiving an enthusiastic ovation.”

The remarks came back into the spotlight as Biden has lambasted President Donald Trump on the campaign trail in recent weeks over allegations that the commander-in-chief referred to Americans who died in World War I as “losers” and “suckers” during a trip to France in 2018.

Those allegations, first brought to light in a story published by The Atlantic, have been widely denied by individuals who were on the trip.