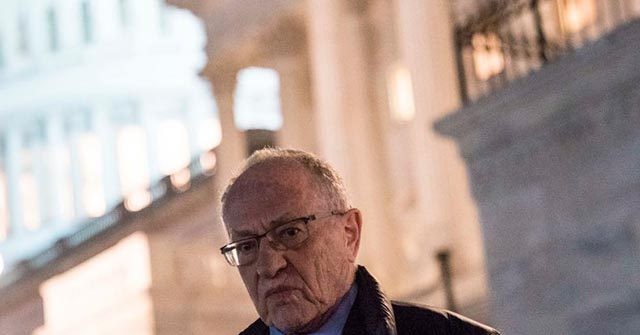 Breitbart News reported that Barrett, a judge on the U.S. Court of Appeals for the Seventh Circuit, continues to be a frontrunner on Trump’s shortlist for the Supreme Court. Several reports from varying news media cite anonymous White House sources that Trump has chosen Barrett.

Dershowitz reflected on Sen. Dianne Feinstein’s (D-CA) questioning of Barrett’s Catholicism during the latter’s confirmation hearings to the U.S. Court of Appeals for the Seventh Circuit in 2017.

“Sen. Feinstein asked her the question and attacked her religion as ‘dogma.’ That was so clearly in violation of the Constitution, which says, ‘No religious test shall ever be required for office under the United States.’”

“I don’t think the answer to that will be, ‘Yes, that’s my view,’ but there’s enough in [Barrett’s] writing to justify asking that hard question,” speculated Dershowitz.

Questioning a judicial nominee on how and if of his or her religious convictions inform his or her jurisprudence must be done delicately, Dershowitz advised.

“You have to be very delicate, and you have to never ever even imply that somebody is not qualified because of their religion or lack of religion,” Dershowitz remarked. “Those days hopefully have gone forever. It’s only about three or four years ago, the Supreme Court consisted of six Catholics and three Jews, not a single Protestant. Gorsuch was the first Protestant on the Supreme Court in several years, and so I think we’ve seen the end of that kind of discrimination.”

“But America still suffers from subtle anti-Catholicism,” continued Dershowitz. “It was deep in our culture in the 19th century. Jefferson and Adams wrote about it. The Ku Klux Klan and the Know Nothing party were virulently anti-Catholic. We have a terrible legacy of anti-Catholicism, and that has to stop, and Sen. Feinstein should have known better and not used the word ‘dogma’ when she was talking about a woman’s faith.”