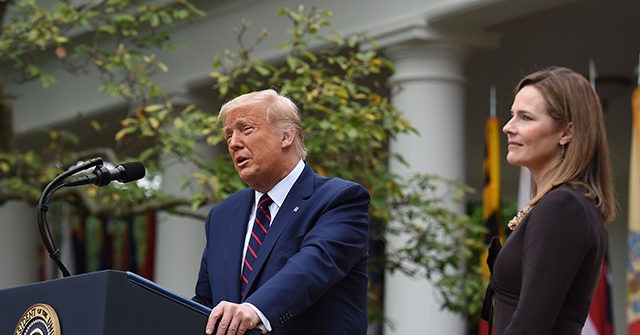 “This should be a straight forward and prompt confirmation should be very easy. Good luck,” Trump said with a grin after announcing the pick at the White House. “It’s going to be very quick. I’m sure it’s going to be extremely non-controversial.”

“I further urge all members of the other side of the aisle to provide Judge Barrett with the respectful and dignified hearing that she deserves and frankly that our country deserves,” Trump said.

The president noted Barrett’s credentials for the Supreme Court position and pointed out her witness as a mother of seven children.

“She opened her home and her heart and adopted two beautiful people from Haiti, her incredibly bond with her youngest child, a son with Down syndrome is a true inspiration,” Trump said.

The president spoke directly to her family, who were all present for the announcement, acknowledging the sacrifice they were making as well.

“To her children, Emma, Vivian, Tess, John Peter, Liam, Juliet, and Benjamin — thank you for sharing your incredible mom with our country,” he said.