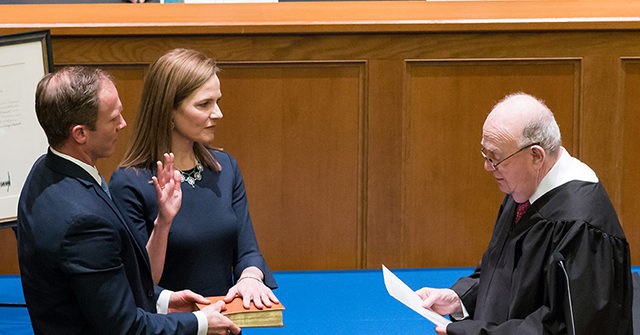 Vice President Mike Pence’s chief of staff Marc Short told Breitbart News he urges the American public to “pray for” President Donald Trump’s Supreme Court nominee and her family because the left and Democrats will attack them “mercilessly.”

While Short would not get ahead of the president’s announcement coming later on Saturday on who he will nominate—it is widely expected to be Judge Amy Coney Barrett—he did say in an appearance on Breitbart News Saturday on SiriusXM 125 the Patriot Channel that whoever the president nominates will face ferocious attacks from Democrats.

“I can’t get ahead of the president’s announcement at five, but I know your listeners will be pleased with the announcement at five,” Short said. “Having a finalist that’s been through recent battles with the confirmation hearings within the last couple of years… the record is well known. There’s no doubt this will be a seminal fight. If I can, I’d like to implore your listeners to pray for the nominee and her family because they will be attacked mercilessly. I don’t know that we’ve had an occasion when the battle lines are so clearly drawn before. I think Republicans in many cases in the past have kept an open mind and in many cases have voted for Democrat nominees. There’s no doubt that Democrats have had a different standard going back to the Robert Bork era and for the last 35 years have looked to tarnish candidates personally and to attack them and not to look into qualifications, but based upon a litmus test of what their views are and what they want to see the court acting upon. It’s going to be difficult but there is no doubt we will stand behind the nominee as you saw President Trump do with Brett Kavanaugh and we look forward to a confirmation before election day.”

Shortly after the news broke Friday night that Trump is expected to select Barrett to fill the seat vacated by the late liberal Justice Ruth Bader Ginsburg, several top Democrats launched vicious smears of her for adopting children from Haiti—questioning the legitimacy of the adoptions. Sens. Josh Hawley (R-MO) and Tom Cotton (R-AR) rushed out to defend Barrett from the attacks, as Breitbart News has reported. The whole episode proves Short’s point correct, and comes as other reports question how aggressively the Democrats will fight this nomination since they have little chance to stop a confirmation before the election on Nov. 3.

Short said the White House is prepared for a grueling and nasty battle with Democrats to get this nomination confirmed.

“It’s what their base anticipates and it’s what they’ve done the last few years,” Short said. “We have every expectation that this will be a smear campaign and again, it will be less about the candidate’s qualifications as a jurist and interpretation it’ll be more about personally held views. That’s simply a different standard that Democrats use that Republicans don’t. We’ve witnessed it for the last 35 years on judicial candidates Republicans have put forward.”

Short also said that historical precedent is on the side of the president nominating and the GOP-controlled U.S. Senate confirming this nominee before the election.

“In 29 vacancies during a presidential year, presidents nominated 29 times,” Short said. “That’s the executive branch’s obligation and that’s what the president does. In those 29 incidences, you have 19 in which the party in power was the same in the Senate. Out of those 19, 8 out of nine were confirmed before election day. Nine out of ten in a lame-duck period. The only exception is for people who withdrew for ethical reasons, not because they were voted down. The scenario we have today, a party in power confirming a presidential nominee in a quick fashion is what is a historical precedent. In fact, something that many people are overlooking is in the 1950’s, during the Eisenhower presidency, they appointed a justice in recess who continued to serve until after the lame-duck period when they were finally confirmed.”

Short said that Saturday’s nomination of another eventual Supreme Court Justice by President Trump is more proof that Trump is a man of his word on this issue. In 2016, he released a list of potential Justices from which he has not veered. He released an updated list a few weeks ago.

“It’s obviously a historic day and it’s extraordinarily exciting for all of us in the administration and hopefully to all of your listeners,” Short said. “I think one of Donald Trump’s greatest legacies will be his opportunity to reshape the courts. I remember on the campaign trail in 2016 when Donald Trump, I think, did something incredibly transparent and unprecedented by saying ‘I’m not gonna just tell you the type of jurist I’ll appoint if I get elected, here is an actual list of jurists from which I’ll choose.’ I think it rallied a lot of conservatives in 2016 behind his candidacy, some in many cases who were reluctant to support the president who jumped on board because of the huge opportunity to reshape the courts. Obviously, those supporters have seen so much of the president’s agenda fulfilled over the last four years.”

It’s not just Supreme Court Justices—which if Barrett, assuming she is the nominee and is confirmed, would be Trump’s third—where Trump and Senate Republicans have succeeded with regard to the courts, either. Up and down the court system, Trump and the Senate GOP have fundamentally shifted federal district and appellate courts back to originalism by appointing and confirming hundreds of judges.

“It’s not just the opportunity for three Supreme Court Justices, but over 200 federal judges confirmed in the first three and a half years and it’s a record,” Short said. “I think that a lot of conservatives have been frustrated that Republican presidential candidates have made promises of the type of jurists they would put forward. In recent years, preceding the 2016 election, we certainly saw Justice Roberts’ decision on the Affordable Care Act that I think alarmed a lot more Republicans. I’ve heard this promise from Republican candidates over and over again that they will appoint conservatives to a court, and it hasn’t materialized.”

Short added that Democrat presidential nominee former Vice President Joe Biden and his campaign refusing to release a list of Justices from which he would nominate candidates to the U.S. Supreme Court is proof he “doesn’t want to be that transparent to the American people because the base of their party really wants to have radical activists appointed and they know that’s not where the American people are looking.”

He also said that Democrat vice presidential nominee Sen. Kamala Harris (D-CA) is someone to watch out for her behavior during the confirmation process because she was particularly vicious to Justice Brett Kavanaugh and because she has questioned different nominees for membership in the Knights of Columbus. That bias against Catholics, Short said, is likely to be evident in how Harris behaves during the confirmation hearings as she is a member of the Senate Judiciary Committee.

“I think something to look forward to is Senator Harris’ participation on the Judiciary Committee,” Short said. “She has questioned some of our nominees’ Catholic faith and whether that should be held against them… Whether or not that apparent anti-Catholic bias arises again with this nominee and the hearings is something we will all be watching keenly for. She was certainly one of the most antagonistic interrogators to Brett Kavanaugh during his confirmation hearing and the role that she plays will be telling to the American people in the coming weeks.”

Short also said that Pence “looks forward to” debating Harris a week from Wednesday on Oct. 7 in Salt Lake City, Utah, and that “he’ll be fully prepared and ready for the evening.”