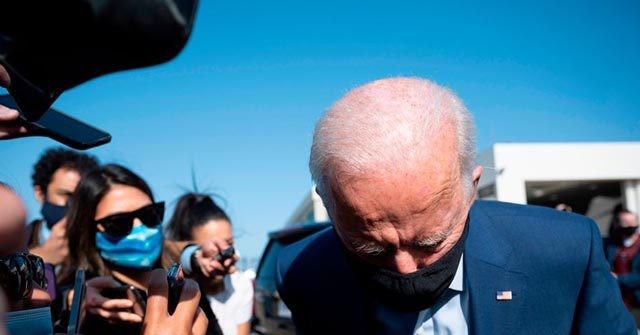 Former Vice President Joe Biden’s campaign called a “lid” for all public activities on Saturday — the tenth time in September that the Democrat nominee will not be on the campaign trail.

Around 9:30 a.m. the campaign informed reporters the former vice president had no public events or travel scheduled for the rest of the day. A “lid” usually also means the candidate will not conduct press conferences or dispense press releases.

The announcement was not surprising given that Biden, himself, told the media on Wednesday he would be “heavily” engaged for the rest of the week with preparations for the upcoming presidential debate. Given that the general election is less than 40 days away, however, the act by Biden’s campaign elicited rebuke on social media. Many were quick to note that the former vice president was on track to be off the campaign trail more than a third of this month, with at least four lids called in the past seven days alone.

Tracking Biden Campaign Lid Calls for the month of September. (Date, time & what the pool reporters of the day wrote)

Joe Biden called a lid on the day earlier this morning. No events, no questions. Less than 6 weeks before the election, the Democratic nominee is working at a 50% clip, calling a lid 7 of the past 14 days and 11 of the past 26 this month. Is this a preview of a Biden presidency?

More than a few reporters were quick to note that the Democrat nominee’s schedule stands in stark contrast to that of President Donald Trump, who has increased his travel in recent weeks as the general election has kicked into gear. On Saturday alone, Trump is scheduled to announce his nominee for the Supreme Court seat vacated by the late Justice Ruth Bader Ginsburg, before flying to Pennsylvania for a rally with supporters.

The differences in schedules between Trump and Biden is quickly becoming a topic on the campaign trail. On Friday, during a visit to Atlanta, Georgia, Trump took a shot at Biden’s team for the frequency with which it allows the candidate to disappear from the campaign trail.

“If I lose to [this] guy — that’s like you losing to a fighter that, you know, hasn’t worked out in the last six months,” the president said. “This guy never goes out! It’s terrible, huh?”