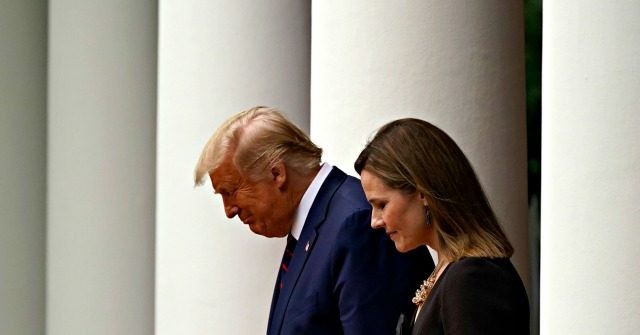 Amy Coney Barrett, President Donald Trump’s nominee to replace Ruth Bader Ginsburg on the U.S. Supreme Court, is already under attack by left-wing politicians and activists, but the outpouring of support for Barrett is also surfacing, including a professor of law at her alma mater, the University of Notre Dame.

O. Carter Snead wrote an oped in the Washington Post on Saturday titled, “I’ve known Amy Coney Barrett for 15 years. Liberals Have Nothing to Fear.”

In his oped, Snead shared his experience with Barrett’s humanity, including while she was a professor at Notre Dame:

A few years ago, a blind student matriculated as a first-year law student at Notre Dame. Upon arrival, she encountered delays in getting the technological support she needed to carry out her studies. After only a few days in Barrett’s class, the student asked her for advice. Barrett’s response was “This is no longer your problem. It is my problem.” Barrett followed up with university administration herself, got the student what she needed, and then mentored her for three years. That student just completed her service as the first blind female Supreme Court clerk in U.S. history.

This is the kind of person Amy Coney Barrett is pic.twitter.com/ckrUSIkQV8

Snead began his commentary by noting that many of his “progressive friends” are undone by having a conservative woman replace a revered liberal judge.

“But I have known Barrett as a friend and colleague for more than 15 years,” Snead wrote. “And I can assure worried liberals that there is nothing about the prospect of a Justice Barrett that should cause them to fear.”

Snead then detailed the things liberals should not fear, including her intellect: “She has an incandescent mind that has won the admiration of colleagues across the ideological spectrum.”

Time and again, I have seen her gently reframe a colleague’s arguments to make them stronger, even when she disagreed with them. And she is not afraid to change her own mind in the search for the truth, as I have seen in several of our faculty seminars. Such open-mindedness is exactly what we want of our judges — and what we can expect Barrett to bring to the Supreme Court, because that is who she has always been.

Snead also claimed — despite the attacks by some, including members of the U.S. Senate — that there is “no need to fear Barrett’s faith.”

“To the contrary, her commitment to treating others with respect grows directly out of her religious convictions,” Snead wrote.

And Snead noted a remark about Barrett by someone from Ginsburg’s chamber.

[They] affirmed that Barrett is ‘not at all ideological’ and believes that she will ‘try as hard as anyone can to bracket the views she has as she decides cases,’” Snead wrote.

Snead wrote, as many would likely agree, “there is of course no way to know in advance how a Justice Barrett would rule on hot-button cases.”

“What is clear is that she would carefully analyze each case on its merits, respectful of the stakes for both the rule of law and the stability of our polity, doing her level best to get the question right, regardless of her own personal views,” Snead wrote.

And, Snead concluded, there is much more to worry about than a superior candidate for the High Court.

“At a time when there is so much to worry about in our troubled nation, having a Supreme Court justice who brings such honesty and integrity to her work should be the least of our fears,” Snead wrote.