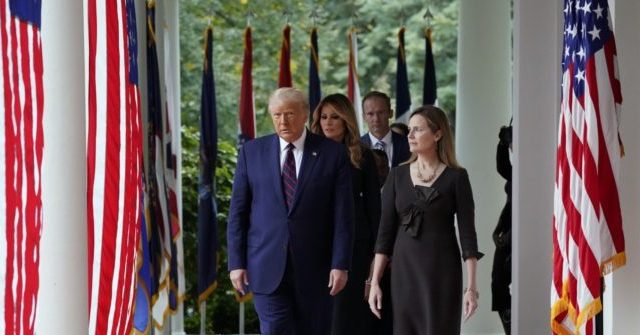 Judge Amy Coney Barrett currently serves on the U.S. Circuit Court of Appeals for the Seventh Circuit with honor and distinction, and I look forward to supporting her nomination to the Supreme Court of the United States. Before her confirmation to the Seventh Circuit, Judge Barrett was a respected academic and award-winning professor at the University of Notre Dame Law School, where she continues to teach. Judge Barrett clerked for Judge Laurence Silberman of the U.S. Court of Appeals for the D.C. Circuit and the late Supreme Court Justice Antonin Scalia.

Though Judge Barrett’s credentials are impeccable, I have no doubt Senate Democrats will try to destroy her reputation for political gain, because they already tried to do just that. In 2017, when she was nominated to the Seventh Circuit, my Democratic colleagues on the Senate Judiciary Committee interrogated Judge Barrett not for her record or her qualifications, but for her faith. It was a shameful exercise of religious bigotry, the likes of which should have long ago been relegated to the history books.

Judge Barrett is well-qualified to serve on the United States Supreme Court. Having confirmed her to the circuit court in 2017 with bipartisan support, the Senate has already undertaken a thorough and rigorous review of her record. Let me be clear: Democrats’ expected attempts to derail this process, along with their contempt for Judge Barrett and her faith, will not impede this nomination.

In 2017, Sen. Dianne Feinstein (D-CA), the ranking member of the Senate Judiciary Committee, drew outrage when she raised concerns about Barrett’s Catholic beliefs during the judge’s nomination hearing for the 7th Circuit Court of Appeals.

“I think in your case, professor, when you read your speeches, the conclusion one draws is that the dogma lives loudly within you,” the senator told the judge at the time. “And that’s of concern when you come to big issues that large numbers of people have thought for, for years in this country.”

Earlier Saturday, President Trump announced Coney Barrett as his nominee to replace the late Ruth Bader Ginsburg on the Supreme Court, calling the pick “one of his highest and most important duties” as president.

“She is a woman of unparalleled achievement, towering intellect, sterling credentials and unyielding loyalty to the Constitution,” the president said in his remarks in the Rose Garden.

In her remarks, Coney Barrett said that she was “deeply honored” by the confidence that President Trump had placed in her and expressed appreciation for his support and kindness.