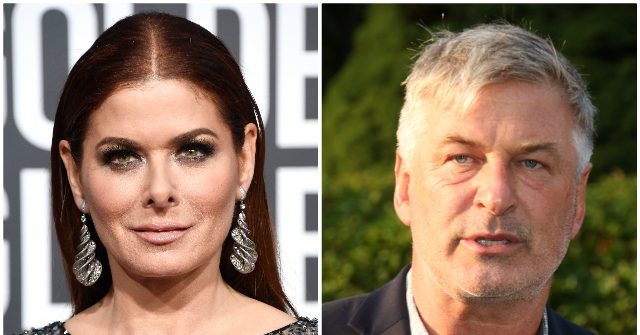 “Amy is like a hybrid of Aunt Lydia and a Stepford wife,” Grammy-winning singer Diane Warren tweeted, referring to the Aunt Lydia villain in The Handmaid’s Tale.

“How much chalk can one blackboard stand?” actress Ellen Barkin tweeted, referring to Barrett’s voice.

Amy Coney Barrett, 48, currently serves as a judge on the 7th Circuit Court of Appeals. A former clerk for Justice Antonin Scalia, Barrett takes a strict “originalist” view of the Constitution that prioritizes the original text over subsequent interpretations. Her nomination is President Trump’s third pick for the high court, following Neil Gorsuch and Brett Kavanaugh.

Left-wingers fear Barrett’s positions on the Affordable Care Act, also known as Obamacare, as well as abortion, due to her strong Catholic faith. Some have already launched smears against her and her family, questioning why Barrett and her husband adopted two children from Haiti.

Actress Ellen Barkin mocked Barrett’s voice and used the hashtag #stfuacb — as in, “shut the fuck up, Amy Coney Barrett.”

I would leap to the defense of any woman being called *grating…but come on, how much chalk can one blackboard stand? #stfuacb

Actor Adam Goldberg claimed that the late Ruth Bader Ginsburg would be upset about Barrett’s nomination, even though Ginsburg was a close personal friend of Scalia.

RBG turning in her grave. Wait is she even buried yet?

Disgraceful. If anyone in your life were as two-faced, callous, dishonest & selfish as this, you’d never want to associate with them. Vote them out. And then pack the courts. https://t.co/4YdtHY3PDU

Actor Alec Baldwin insisted that Judge Barrett “is only another card that the Psycho turns over to destroy the Constitution.”

I wonder if Coney, the arch Catholic, realizes that her nomination is only another card that the Psycho turns over to destroy the Constitution.

Debra Messing claimed that the president is pushing Barrett’s nomination so that “she can vote him in w/ contested election results.”

THIS IS A LAST DITCH POWER GRAB. At GRAVE risk:
🚨Universal Healthcare
🚨Preexisting Conditions PROTECTIONS
🚨Women’s Bodily Autonomy
🚨Voting Rights
🚨Response to the Climate Crisis#Trump said he is pushing this through so she can vote him in w/ contested election results. https://t.co/zAOLCsqPgA

Dear Republican voters
Remember 2016, when the Senators you elected refused to even consider an Obama nominee while screaming “Let the American people decide!”?
Now that they’ve proven to be lying, racist hypocrites, does that make you less likely to vote for them again?
Or more? https://t.co/t2oLOmTbRy

Elections are won by margins and there will be people who Vote against Trump and Republicans because they remember their mom, sisters and friends who died from back alley abortions.

oh i have nothing to fear? oh ok now i feel just great! #NoSCOTUSforAmy https://t.co/Zm7WzV9qjh

Actor Ethan Embry claimed that Barrett is “unqualified” despite her impressive career on the bench and respect from those who disagree with her decisions.

Actress Kristen Johnston said that women are “fucked,” referring to Barrett’s association with the Catholic community known as People of Praise.

We are so fucked, ladies. https://t.co/6mAoJfwhQJ

General Hospital star Nancy Lee Grahn spread the debunked theory that People of Praise was the inspiration for The Handmaid’s Tale. Novelist Margaret Atwood has written that she was inspired to write the novel after visiting Afghanistan and seeing the oppressive Islamist clothing that women were forced to wear.

Amy, belongs 2 a cult that served as inspiration for Margaret Atwood’s dystopian novel, “The Handmaid’s Tale” called ‘People’s Praise’ which teaches that men are the head of the household, is replacing a woman who was against everything this indoctrinated stepford judge stands 4. https://t.co/HcU5lFngZq