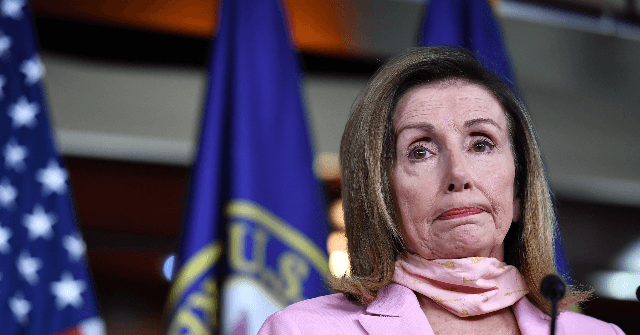 Speaker of the House Nancy Pelosi (D-CA) has officially informed her Democratic Party caucus that the House of Representatives could decide the presidential election — and has urged them to focus on winning races that could decide the outcome.

The House could decide the election if no candidate achieves a majority in the Electoral College.

As Breitbart News explained three weeks ago, in “How Pelosi’s House of Representatives Could Re-elect Trump“:

It seems almost certain that neither party will accept a close result in the presidential election on November 3. And given the likely delays due to vote-by-mail, recounts, and legal challenges, it is possible neither President Donald Trump nor former Vice President Joe Biden will have an Electoral College majority by December 14, when the Electors cast their votes.

The election will then be decided by the House of Representatives, as indicated by the 12th Amendment to the U.S. Constitution. (It has happened before, in 1800 and 1824.)

The 12th Amendment states that “if no person have such majority [in the Electoral College], then from the persons having the highest numbers not exceeding three on the list of those voted for as President, the House of Representatives shall choose immediately, by ballot, the President.”

The word “immediately” means that the current Congress would choose. That, in turn, would seem to mean Speaker of the House Nancy Pelosi (D-CA) and the majority Democrats would prevail, and pick Biden.

Not so fast: The 12th Amendment goes further. “But in choosing the President,” it says, “the votes shall be taken by states, the representation from each state having one vote” [emphasis added].

Pelosi has done the math, and expects the new Congress to handle the presidential election — if it comes to that.

Therefore, she has told Democrats to focus their resources on winning in states where Republicans only control a slim majority of seats.

Pelosi, in a Sunday letter to House Democrats, urged them to consider whether the House might be pulled into deciding who is president when determining where to focus resources on winning seats in November. This could lead to more concerted efforts by Democrats to win in states such as Montana and Alaska — typically Republican turf but where Democrats have been competitive statewide. In these states, Democratic victories could flip an entire delegation with a single upset House victory.

“The Constitution says that a candidate must receive a majority of the state delegations to win,” Pelosi wrote. “We must achieve that majority of delegations or keep the Republicans from doing so.”

Trump also alluded to a possible House vote in a speech in Pennsylvania on Saturday.

The odd math of a possible House of Representatives vote to elect the president means that states like Alaska are in play.

Democrats hold a one- or two-vote seat edge in seven states that are expected to feature at least one sharply contested House race: Arizona, Iowa, Maine, Michigan, Minnesota, Nevada and New Hampshire. Republicans hold a similarly tenuous edge in Florida. The Alaska and Montana at-large seats are held by Republicans, meaning a Democrat would change the delegation’s vote in a presidential tally.

Trump announced Saturday that he had approved a “Presidential Permit” for “the A2A Cross-Border Rail between Alaska & Canada.”