He focused on the Caesar Syria Civilian Protection Act (the “Caesar Act”), which seeks to punish individuals or businesses trading with the war-torn nation, providing another hammer blow to an already deteriorating economy.

“The real purpose of the Act is to put pressure on Syrians, their livelihoods, and their daily lives,” Al-Moualem said. “It is an inhumane attempt to suffocate Syrians, just like George Floyd and others were cruelly suffocated in the United States.” 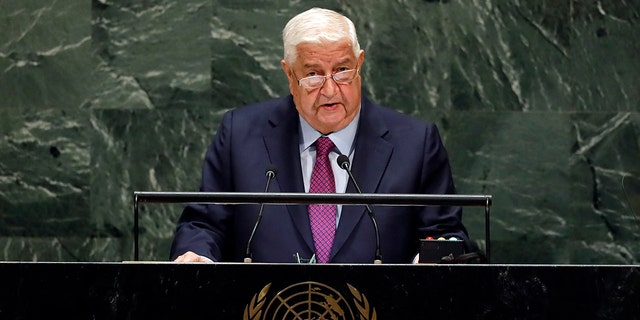 Al-Moualem went further, claiming that “the continued illegitimate presence of American and Turkish forces on Syrian soil meets all the legal conditions of an occupation.”

“The current Turkish regime has become a rogue and outlaw regime under international law,” the minister said. “Its policies and actions, which threaten the security and stability of the whole region, must be stopped.”

This is not the first time that foreign nations have used America’s domestic issues to illustrate displeasure with policy: In June, Russia described U.S. policy towards Iran as “putting a knee” to the country’s neck, according to Reuters.

Iran itself made a similar comparison only last week when Iranian President Hassan Rouhani said, “We instantly recognize the feet kneeling on the neck (of George Floyd) as the feet of arrogance on the neck of independent nations” during a pre-recorded message to the U.N.

“The footage broadcast to the world concerning the treatment of an African American by the U.S. police is reminiscent of our own experience,” Rouhani said.

Floyd, a Black man, died after a white Minneapolis police officer knelt on his neck for nearly nine minutes. The death on May 25 sparked a wave of global protests against police brutality and racial injustice.

The U.S. Army recently declared that it will bolster its forces in Syria as ISIS “still poses a threat,” according to Operation Inherent Resolve spokesman Col. Wayne Marotto.