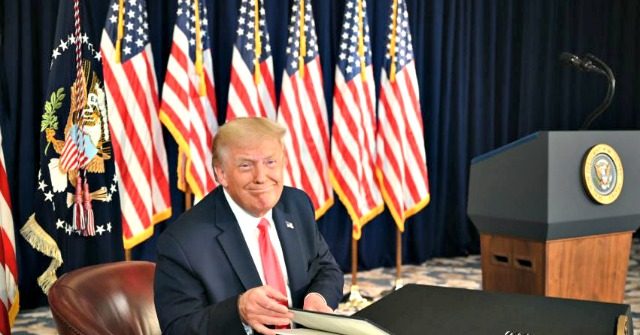 White House Press Secretary Kayleigh McEnany told Breitbart News exclusively that the New York Times piece on President Donald Trump’s taxes represents “liberal media” in an attempt to “desperately” engage in a “smear” of the president ahead of the election.

The Times claimed that Trump only paid $750 in taxes in a piece over the weekend, but McEnany said this hit piece will not convince voters to turn on Trump, because the public sees Trump donating his entire $400,000 annual salary as president back to the government every quarter and that he has “sacrifice[d]” his successful business career to serve as president.

“Democrats and the liberal media are desperately trying to smear President Trump ahead of the election, but this trivial attack did not persuade the American people in 2016,” McEnany told Breitbart News on Monday. “For four years, the forgotten men and women of America have watched their President sacrifice his eminently successful business career, generously donate his salary, and tirelessly fight for them every single day.”

In addition to the president’s generosity when it comes to donating his entire salary—he technically actually has to legally keep $1 per year, as the president is by statute not allowed to work for free—he has also, as McEnany said, taken hits in his business because he is not running that day-to-day right now. In other words, it’s costing Trump lots of money to serve as president—meaning it would be much easier for his business prospects to just go run his business. Trump has made this point repeatedly on the campaign trail.

Several experts have already critiqued the Times story on Trump’s tax situation, including the Center for Tax Freedom’s Ryan Ellis in a tweet thread and in an op-ed for the Federalist.

What should people think about the @nytimes Trump tax story? A thread. 1/https://t.co/1LxVEbJlRG

Breitbart News economic editor John Carney has as well, and it’s worth noting the Times tried these same attacks in 2016 and in subsequent years, to no avail.

Democrat candidate former Vice President Joe Biden and other Democrats—as well as establishment media figures—quickly latched onto the latest Times attack to try to bash Trump with it. Within hours of the Times piece publishing, Biden had already launched a stock-footage-filled web advertisement claiming Trump did not pay as much in taxes as many other professions.

A big problem in their logic, however, is that Biden and his wife actually created a series of corporations to avoid paying payroll taxes on millions of dollars of income they brought in after Biden’s time as Vice President. As Breitbart News reported earlier on Monday, the Bidens created a pair of S Corporations to avoid tax liability, saving themselves—albeit in a legal manner, through a loophole that even former President Barack Obama tried to close—hundreds of thousands, perhaps even millions of dollars they would have owed to the federal government.

“Joe Biden spent five decades cashing a government paycheck before cashing out on his public office to the tune of nearly $16 million dollars made from speaking fees, book sales, and a fake ‘professorship,’” Deputy Director of Communications for Rapid Response for Trump’s re-election campaign Matt Wolking told Breitbart News. “Donald Trump spent decades building a business empire and now he is working night and day for the American people for free because he loves our country and wants to make it great again.”

Biden has no made pledge to donate his salary if elected, and has given every indication that he would keep the hundreds of thousands of taxpayer dollars—presidents make $400,000 per year—annually if he won.

Being president has indeed been costly for Trump, who again is not taking a salary to execute the office. Trump has, each quarter as president dating back to early 2017, donated $100,000—for a total of $400,000 annually—to a different agency in government.

For instance, in the first quarter of 2017, he donated his salary to the National Parks Service to help fund the maintenance backlog in America’s historic battlefields.

Then-Interior Secretary Ryan Zinke said, upon accepting the donation at the time”

President Trump is dedicated to our veterans, our public lands, and keeping his promises, and by donating his salary to the National Park Service to repair our historic battlefields [he] proves his commitment. These historic places tell the story of conflicts that helped shape our country’s history, and they also honor the many men and women who have given their lives in service of this great nation. I’m honored to help the president carry out his love and appreciation for our warriors and land.

In the second quarter of 2017, the president donated his salary to the Department of Education to fund a Science Technology Engineering and Mathematics (STEM) camp for kids.

Education Secretary Betsy DeVos said as she accepted that donation at the White House:

Today’s and tomorrow’s economy requires engaged students, boys and girls, are prepared for STEM careers. That’s why we have decided to use the President’s 2nd quarter salary to host a STEM-focused camp for students at the Department of Education.  We want to encourage as many children as possible to explore STEM fields in the hope that many develop a passion for these fields.

In the third quarter of 2017, the president donated his salary to the Department of Health and Human Services (HHS) to fight the opioid epidemic. Then acting-HHS Secretary Eric Hargan praised the president’s donation during a White House briefing on the matter at the time.

“His decision to donate his salary is a tribute to this compassion, to his patriotism and his sense of duty to the American people,” Hargan said.

His fourth quarter salary in 2017 went to the Transportation Department, and Secretary of Transportation Elaine Chao praised the investment in U.S. infrastructure improvement during an early 2018 press briefing at the White House.

The president’s gift underscores his promise to do all that he can for veterans, which includes supporting those who care for our veterans — not just those of us at VA, but the husbands, the wives, the families and the community caregivers who are out there, day in and day out, making life easier for those who have borne the battle.

In 2019, Trump opened the year by donating his salary to the U.S. Department of Agriculture (USDA), whose Secretary Sonny Perdue said the donation “further illustrates President Trump’s affection for farmers and ranchers.”

In the second quarter of 2019, the president donated his salary to the office of the Surgeon General, and then in the third quarter to the Office of the Assistant Secretary of Health (OASH)—both to fight the opioid crisis.