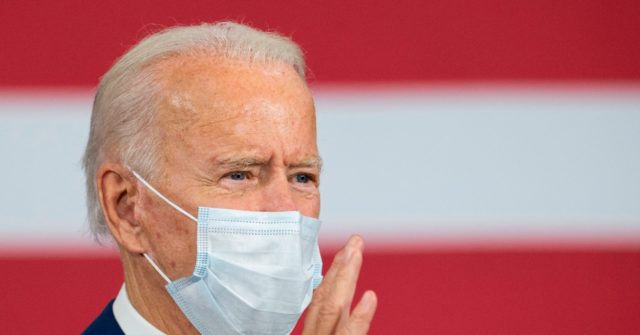 The establishment media is all aflutter Monday after a New York Times story over the weekend about incumbent GOP President Donald Trump’s tax records, but it turns out Democrat candidate former Vice President Joe Biden used a series of tax code loopholes to avoid paying hundreds of thousands of dollars in taxes over the years.

Back in August, the Wall Street Journal’s Chris Jacobs exposed how the Biden family structured what is called an “S-Corp” to avoid paying hundreds of thousands of dollars in taxes.

“How the Bidens Dodged the Payroll Tax,” was Jacobs’ headline on Aug. 10.

In it, the Journal details how the Bidens set up an S-Corporation to avoid paying more than half a million dollars in taxes they would have otherwise owed.

“Joe Biden responded to President Trump’s partial suspension of payroll-tax collections with a statement calling it the ‘first shot in a new, reckless war on Social Security,’” Jacobs wrote. He continued: “‘Our seniors and millions of Americans with disabilities are under enough stress without Trump putting their hard-earned Social Security benefits in doubt.’ Mr. Biden’s objections might be more persuasive had he and his wife, Jill, not gone out of their way to avoid funding seniors’ entitlement benefits. According to their tax returns, in 2017 and 2018 the Bidens and his wife Jill avoided payroll taxes on nearly $13.3 million in income from book royalties and speaking fees. They did so by classifying the income as S-corporation profits rather than taxable wages.”

Jacobs continued in his expose by noting the corporation the Bidens established to avoid paying the payroll taxes on millions of dollars in income amounts to more than half a million dollars in taxes that Joe and Jill Biden did not pay.

“According to the Urban Institute, a couple featuring one high earner and one average earner, retiring this year, will have paid a total of $209,000 in Medicare taxes during their working lives,” Jacobs wrote. “The Bidens avoided paying nearly twice that much in Medicare taxes during two years. The maximum payroll tax affected by Mr. Trump’s suspension is $1,984—less than 1/250th of the amount the Bidens avoided in 2017-18. The Bidens didn’t avoid any Social Security tax, which applied only to the first $127,200 of income in 2017 and $128,400 in 2018. But they would under Mr. Biden’s tax plan, which would impose the 12.4% Social Security tax on income over $400,000; the same loophole he used in 2017-18 would shield him from his own tax. And how can Mr. Biden claim to protect Medicare and ObamaCare when he avoided more than $500,000 in taxes that fund the two programs? The media have largely ignored the Bidens’ accounting legerdemain, fixating on Mr. Trump’s tax returns instead. But at least the president isn’t looking to raise taxes on everyone else.”

The Wall Street Journal is hardly the only outlet to illustrate how the Bidens used this tax code loophole of creating an S-Corporation to save themselves from paying hundreds of thousands—perhaps now millions—of dollars in taxes over the years.

CNBC’s Darla Mercado in 2019 wrote about it explaining to her readers how they can use the same loopholes Biden did to avoid paying their taxes.

“The former vice president and 2020 presidential contender and his wife Jill Biden reported about $10 million in income in 2017 from a pair of S-corporations, CelticCapri and Giacoppa,” Mercado wrote in CNBC. “The two entities were paid for the couple’s book deals and speaking gigs. That mean any amounts the Bidens received as a distribution wasn’t subject to the 15.3% combined Social Security and Medicare tax. Here’s how it works. S-corporations pay their employee shareholders in two ways: wages and distributions.The S-corps reported another $3.2 million in income in 2018.”

In other words, on much of the income Joe and Jill Biden generated through the corporations they established to pay themselves—CelticCapri and Giacoppa are the names of the two so-called S-Corporations—they did not have to pay payroll taxes collected to fund Social Security and Medicare.

Those on the left are not happy with the Bidens over the hypocrisy, either. The Intercept’s Ryan Grim in 2019 noted Biden has used Delaware corporation laws to hide his financial information from the American people.

“The Bidens have used their home state’s financial privacy laws to shield his income from public view, by setting up two tax- and transparency-avoidance vehicles known as S corporations,” Grim wrote. “He and his wife Jill Biden called them CelticCapri Corp. and Giacoppa Corp., respectively, and, according to the Wall Street Journal, have reported more than $13 million in profits the previous two years that weren’t subject to specific disclosure or self-employment taxes. As CNBC has described, money Biden made from book deals and speeches flowed into the S corporations and was then remitted to Biden and his wife as ‘distributions’ rather than salary. When money is funneled through an S corporation, the recipient doesn’t owe Social Security or Medicare taxes on it, nor can the source of revenue be traced. (In addition to the distributions, the Bidens drew relatively small salaries from the S Corporations: under half a million dollars, for which they owed self-employment taxes.)”

What’s more, as Ryan Ellis from the Center for a Free Economy wrote in a Washington Examiner op-ed last year, the last budgets from the Barack Obama and Joe Biden administration called for an end to this loophole allowing S-Corporations to avoid payroll taxes.

That means Barack Obama, the former Democrat president of the United States, does not support what Biden has established in these S-Corporations to avoid payroll tax liability on millions of dollars in income.