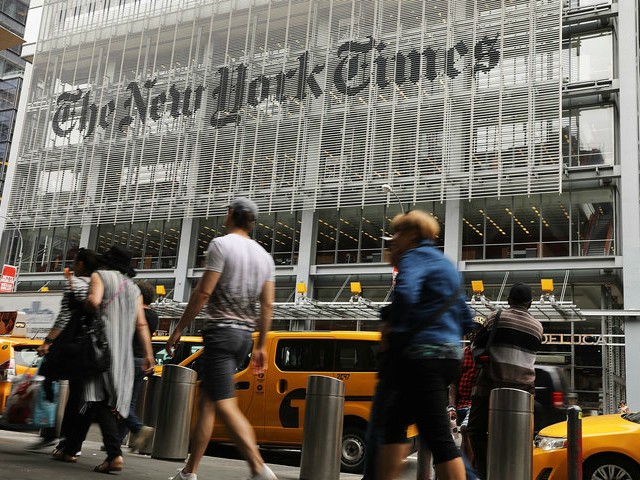 The far-left New York Times claims it obtained copies of President Trump’s tax returns and is counting on ignorance to turn its nothingburger into some kind of scandal.

The only real news in the returns is how they debunk three media conspiracy theories. Although the Times hides the news as though it doesn’t matter, and despite years and years of the media floating the idea, we now know there’s nothing about Russia in Trump’s tax returns. No secret loans. No oligarch connections. No nothing.

Finally, Trump is in fact under audit, which means he’s been telling the truth for five years about that, about why he does not want to release his tax returns.

So, even though the tax returns basically debunk three hoaxes the fake media have been floating for years, the Times still pretends it has something other than a nothingburger with the amount of money Trump has paid in taxes over the years.,

And countless variations of “Trump paid less tax than average American” and “Trump paid only $750 in taxes.”

And that’s where the media are not only counting on the ignorance of the American people, but contributing to it…

From the looks of it, Trump pours his income back into his business, which allows him to legally write it off, which results in him paying no federal income tax but all kinds of business taxes: property, real estate, and payroll, just for starters.

Joe Biden does the same thing.

The other fake narrative is how Trump’s reported business losses prove he’s a failure as a businessman.

Well, that’s not how business success or wealth works.

Amazon, which is considered one of the most successful businesses in history, paid no corporate tax last year.

The idea Trump is not successful when he literally owns a single store worth more than Mitt Romney, is simply preposterous. Not to mention Trump Tower, which sits on the most valuable real estate in the world, not to mention all the resorts and country clubs.

I’m not an accountant, so take this with a grain of salt, but what I see in Trump’s taxes is a man who is asset-wealthy and cash poor, but cash poor by choice, because he is always building his empire.

I also see a guy legally taking every write-off available to him, and who doesn’t do that?

For decades Trump has built and owned countless luxury properties, employed thousands, and been one of the most respected and admired brands in the world.

What I wish is that he would explain that, instead of babbling on about how it’s all fake news.

I liked the 2016 Trump who said Hell, yeah, I’m rich and you’re damn right I pay as little in taxes as I can.

Instead we get this defensive mush 35 days out from a reelection campaign the polls say Trump is losing.

Just like when he was asked if he would allow for a peaceful transfer of power last week, he whiffed what he should have used as an opportunity, not just to attack the media for not telling the full story, not just to declare victory with respect to Russia and Stormy and an ongoing audit, but to remind people that once again he is the victim here — the victim of an illegal leak.

The other thing to keep in mind is that even thought the Times knows there’s no scandal here (quite the opposite I’d say — the returns actually vindicate Trump), it’s blared out by the media as a scandal to keep Trump on defense and to keep the chaos churning around him. Between this and the lies about what Trump said about dead Marines, the goal of the fake media is to exhaust people, to make us wish it away by wishing Trump away.