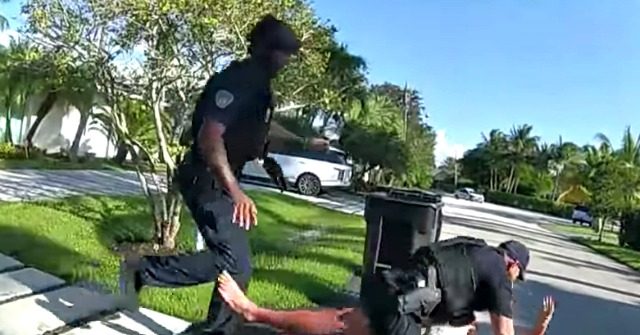 Police tackled President Donald Trump’s former campaign manager, Brad Parscale, to the ground after his wife Candice fled their Fort Lauderdale home claiming that he loaded and racked a gun in front of her and was afraid he had committed suicide.

According to the police report, Candice Parscale fled the residence and went to a nearby home to ask her neighbor, Terry Bethal to call 911.

Bethal called the police and, according to the audio of the 911 call, said that Candice Parscale had heard a bang after she left the home and was afraid that her husband had shot himself and was afraid to re-enter her home.

Earlier, Candice Parscale said that Brad loaded a gun and racked it in front of her after an argument which led her to flee the residence, according to the police report.

When officers arrived on the scene, Candice Parscale said she believed that Brad was still alive because they heard him “ranting” and “pacing” in the home. She also said that Brad “suffers from PTSD” and had been drinking.

Officers called Brad on a landline in the home and urged him to exit the building, but he refused to do so until he spoke to his wife.

“Bradley’s speech was slurred as though he was under the influence of an alcoholic beverage and he seemed to be crying,” the report read.

A SWAT team was also deployed to the scene.

One officer noticed that Candice had bruises on her arms and that she said they were from a physical altercation with Brad earlier in the week, according to the report. Another officer reported that Candice had scratches on her body and bruising on her face.

Officer Christopher W. Wilson, a friend of Parscale’s, said in the report that he was informed by a mutual friend that there was a SWAT team at Parscale’s home.

Officer Wilson spoke with Parscale on the phone and convinced him to exit the home to speak with him.

He ultimately exited the home shirtless and carrying a beer.

The Fort Lauderdale Police Department released a video of the incident.

“I’m not trying to kill myself … She’s lying, I’m your friend,” he told the officer as he exited the house. “She started saying all this shit…”

Police officers repeatedly ordered him to get to the ground and quickly tackled him as he repeatedly protested, “I didn’t do anything!”

The reporting officer who tackled Parscale said he initiated the double leg takedown citing concerns he could have concealed a gun in his shorts pockets.

Officers secured him and handcuffed him and removed him to a patrol car.

Brad Parscale’s friend, Officer Wilson, spoke with him, and Parscale told him where his guns were and asked for his phone.

His wife showed police where the guns were and got shoes, a shirt, and a phone for Brad.

The police later confiscated ten guns in Parscale’s home and he was hospitalized.

Parscale was replaced as campaign manager in July but continued to serve as a senior adviser for data and digital operation of the campaign.