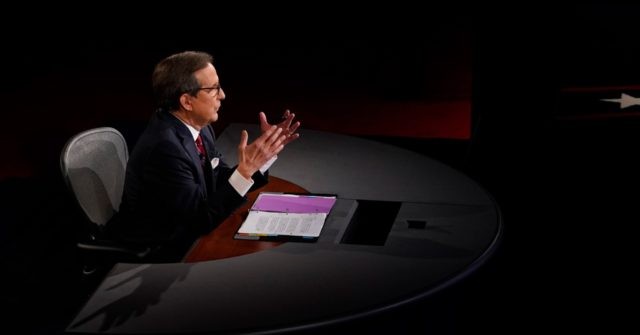 VERDICT: FALSE. President Trump has done so repeatedly, despite what Wallace — and Joe Biden — have suggested.

During the first presidential debate, Wallace challenged President Trump to condemn white supremacists. It was an astonishingly ill-informed — and inflammatory — challenge, and repeated a lie that Biden has told frequently in the campaign.

As Breitbart News noted in a recent fact check:

ABC News fact-checked Biden, and noted — commendably — that Trump condemned white supremacists after the Charlottesville riots of August 2017, which Biden has also lied about, as well as on other occasions:

Two days after violent clashes in Charlottesville, Virginia, in 2017 — after first equating violence from white supremacists with those protesting — Trump said, “Racism is evil and those who cause violence in its name are criminals and thugs, including the KKK, neo-Nazis, white supremacists, and other hate groups.”

In 2019, following shootings in El Paso, Texas, and Dayton, Ohio, Trump said, “In one voice, our nation must condemn racism, bigotry and white supremacy. ”

“These sinister ideologies must be defeated. Hate has no place in America. Hatred warps the mind, ravages the heart, and devours the soul,” he added.

Trump volunteered to condemn whatever group Wallace suggested. In the cross-talk, the name “Proud Boys” emerged, and Trump criticized them. Trump then noted — correctly — that the violence going on in the country is mostly left-wing.