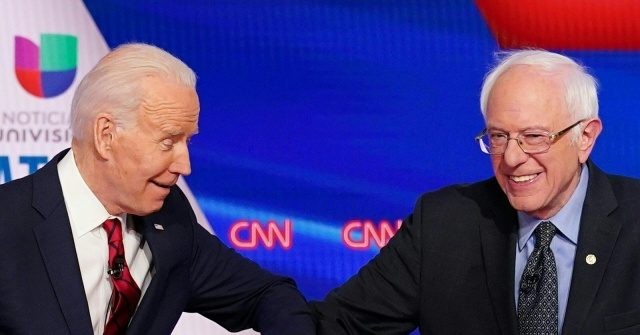 “No I don’t support the Green New Deal,” Biden said.

Joe Biden does not support the Green New Deal. His words, not ours. #debates2020 pic.twitter.com/tmc9Y0xzjQ

‘The party is me. Right now, I am the Democratic Party’ — Joe Biden calls out Trump for lying about his health care plans
#Debates2020 pic.twitter.com/N3fqetmxUM

Similarly, on progressive Democrats’ plan to defund police departments, Biden denounced the Defund the Police movement that has spurred a number of riots across the country.

Biden’s ditching of the progressive Democrats’ largest policy ideas comes as leftist activists are vowing to fight him if he is elected.

“The people who were not featured [at the Democrat National Convention] are going to use their leverage in Congress to fight for a progressive agenda and make sure Joe Biden is not only compromising with people like Sen. Joe Manchin [D-WV] and Rep. Henry Cuellar [D-TX], but forced to collaborate with Reps. Ro Khanna [D-CA] and Pramila Jayapal [D-WA],” Waleed Shahid of Justice Democrats told Axios.