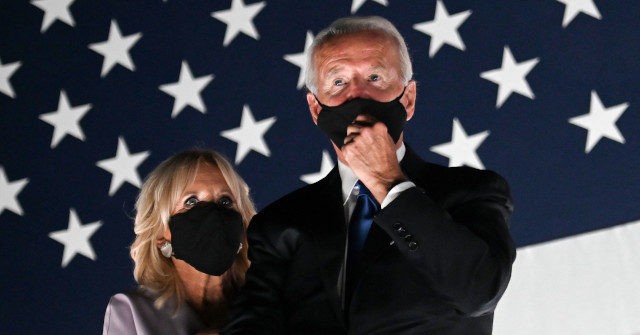 Former Vice President Joe Biden and his wife, Dr. Jill Biden, gave 1.5% of their income to charity in 2019, records show.

The Bidens released several years of their tax returns ahead of the first presidential debate on Tuesday, on the heels of a New York Times story on Sunday that claimed Trump had paid no net taxes in some recent years due to business losses. (The Times noted that Trump had paid millions to the U.S. Treasury but rolled that forward to future tax years. It also found no evidence of any links to Russia, as Democrats had long claimed, nor any links to other media-fueled conspiracy theories.)

The charities to which they gave were: Northern Virginia Community College Educational Foundation ($1,200); St. Joseph on the Brandywine, where the Bidens’ son, Beau, is buried ($2,000); and Westminster Presbyterian Church ($1,500). They also list $10,000 in contributions from “Giacoppa Corp,” one of the S-corporations the Bidens use for some of their income (thereby avoiding Medicare and Social Security taxes).

The Bidens have been criticized in the past for paltry giving, though they gave more in recent years. In 2008, ABC News reported that they had given only $369 per year, on average, for the previous decade. They had never given more than $995 in any given year.

Joe Biden and his wife donated just $70,000 to charity in the two decades leading up to 2017, per their tax returns. But when their earnings skyrocketed in 2017, so did their giving. That year they handed more than $1 million, or about 9% of their income, to 26 charities—including their family’s Beau Biden Foundation for the Protection of Children ($150,000) and the Joseph Biden Foundation ($100,000).

President Trump has donated his entire salary to the U.S. since taking office. White House Press Secretary Kayleigh McEnany told Breitbart News that Trump has given $1.4 million in salary to the federal government.

Trump has also given large amounts to charity in the past, though he was ordered to pay an additional $2 million after his campaign paid money to charities, rather than his family foundation, which New York State forced him to dissolve.

Correction: an earlier version of this article overstated the Bidens’ contribution by 0.1%.