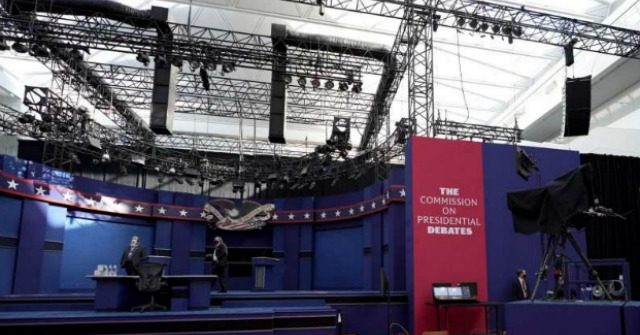 9:07 PM: First question to Trump is about the Supreme Court.

Trump says he won the election and elections have consequences. He says “we have a phenomenal nominee” who is “respected by all” and “good in every way.” He claims some of her biggest endorsers are very liberal people. Trump says he also has “a lot of time after the election.”

Trump says Democrats wouldn’t even think about not doing it if they were in power. Trump says they had Merrick Garland but they didn’t win the election so “they were stopped.”

9:06 PM: Trump and Biden get on the stage, but they don’t shake hands due to COVID-19 restrictions. Biden asks Trump: “How are you, man?”

9:05 PM: Chris Wallace welcomes the audience to the debate. He says there will be roughly six 15-minute segments. He says he picked all of the questions and none of the questions have been shared with the commission or the two candidates. No cheering or boos allowed, says Wallace.

Families are in the audience.

An observation from inside the debate hall: Everyone in Biden’s side of the hall is wearing a mask. More than half on Trump’s side, including his four children, are not wearing masks. According to the Cleveland Clinic, it’s a requirement that all guests wear masks.

.@HillaryClinton doing some pre-debate spin on @maddow: “[Trump’s] big advantage of being a so-called reality TV star…has run its course. I think his series is about to be canceled.”

8:30 PM: Trump will get the first question at the top of the hour after winning the coin toss.

The youngest person on stage tonight will be Chris Wallace.
He’s 72.

It’s debate night, so I’ve got my earpiece and performance enhancers ready. pic.twitter.com/EhOiWdjh1b

Just arrived in the Great State of Ohio. Real Polls have us leading by even more than 2016. With Biden being against Fracking (Energy & Jobs) & your Second Amendment, we should be in very good shape!

The First Debate: Voters who plan to watch are tuning in to root for their candidate to see how they do. CBS News surveyed a representative group of likely voters who say they plan to watch tonight. https://t.co/2x88rgrtYw pic.twitter.com/MGDDXh8MwX

Other doctors are joining in with Dr. Stephens to protest. They are chanting phrases like “Trump Lied, People Died.” Cleveland Police confiscated the megaphone as it is a prohibited item in this area outside the debate stage. @SpectrumNews1OH pic.twitter.com/cniEHqTiHv

As Trump arrives in #Cleveland for #Debates2020, he’ll be trolled by massive billboards from artists like @OBEYGIANT and others: https://t.co/To2MMXcKP5

An area of Pennsylvania that is solid red, overall Pennsylvnaia is very much a purple state, blue to the east and west, red in the central. Much of the blue areas though voted for Trump in 2016. https://t.co/rym01OWgnW