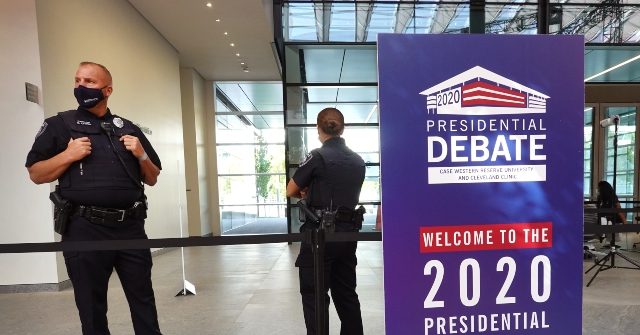 National Guard members were seen in the streets of Cleveland, Ohio, on Tuesday, ready to help quell potential unrest ahead of the first presidential debate.

“More than 300 guard members were ordered into the city on a proclamation by Gov. Mike DeWine to’ensure a safe and secure environment’ during the debate,” according to the New York Post.

After receiving a formal request from Cleveland officials last night, I am issuing a proclamation today that activates around 300 @OHNationalGuard members to help @CLEPolice ensure a safe and secure environment for those attending Tuesday’s presidential debate in Cleveland.

Many of the guard members were activated Monday, and photos on Cleveland.com showed camouflaged Humvees driving through the streets.

“The area around Cleveland Clinic, the site of Tuesday night’s 90-minute debate, was also sealed off by a ring of tall iron fences,” the Post report said.

Businesses and other buildings in the area also took precautions to brace for possible vandalism and rioting, according to the Cleveland.com article.

“Villa shoe store at the corner of East 79th Street and Euclid Avenue was one of the most prominent buildings near the Clinic to board up its windows, shades of downtown Cleveland which saw some business looting after the May 30 George Floyd protests downtown,” the report stated.

In addition to the Ohio National Guard, the Secret Service and the FBI will provide security throughout the debate, according to News 5 Cleveland.

“What May 30 taught us is that peaceful protests can go in a different direction in a short period of time,” Special Agent in Charge with the Cleveland FBI Eric Smith told the outlet.

“There are a lot of things that we’ve learned not just from May 30 but the subsequent protests around the country that we have incorporated into our plan itself,” Williams said.

Fox News anchor Chris Wallace will host the presidential debate scheduled to being Tuesday night at nine p.m. EDT, according to UPI.

“Wallace has selected six topics for the debate — the COVID-19 pandemic, race and violence in U.S. cities, the Supreme Court, the integrity of the election, Trump’s and Biden’s records and the economy,” the report said.