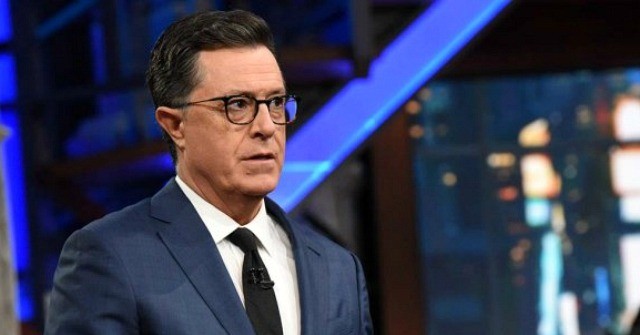 CBS’s left-wing late-night host Stephen Colbert admitted on Monday’s episode of The Late Show that there isn’t much Democrats can do to stop judge Amy Coney Barrett from being confirmed to the U.S. Supreme Court. “Justice Barrett is inevitable, like death.”

Colbert claimed that Americans were once again reminded that Donald Trump is indeed still their president when he nominated judge Barrett to fill the late Ruth Bader Ginsburg’s seat on the U.S. Supreme Court last week. “There’s not a lot democrats can do to stop Barrett from being confirmed,” Colbert said. “Justice Barrett is inevitable, like death, and Donald Trump not paying his taxes.”

Colbert also lamented t-shirts the read, “Notorious ACB” — a spoof of the late rapper Notorious BIG, which was also a nickname given for the late Justice Ginsburg.

“RBG isn’t even in the ground yet, and you’re stealing her nickname?” Colbert complained.

Judge Amy Coney Barrett was nominated by President Donald Trump on Saturday to fill the seat once belonging to the late Justice Ruth Bader Ginsburg. The Senate is expected to bring the confirmation to a vote before the 2020 election, which has the Democrats in an uproar.

The CBS host also talked about an ABC-Washington Post poll that discovered President Trump’s lead among men is the same as what it was in 2016 when he ran against Hillary Clinton, meaning that men make up one of the groups whose support hasn’t weakened over the president’s first term in office.

“Come on my mans,” said Colbert. “You’re clinging to Trump like a worn-out pair of briefs. Let it go! He’s nothing but a loose band with skid marks, and he’s making the women in your life lose sexual interest in you.”