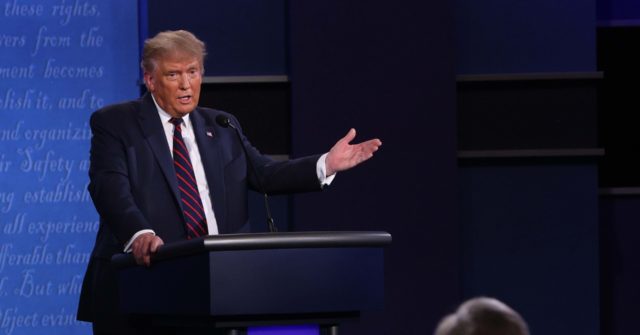 CLAIM: President Donald Trump told white supremacists like the Proud Boys to “stand by” and did not condemn them.

VERDICT: DECEPTIVE EDIT. The transcript shows Trump said “sure” when asked to condemn white supremacists. The “stand” language came from the moderator, and the “Proud Boys” were first brought up by Democratic nominee Joe Biden.

Critics of the president are claiming, incorrectly, that he would not condemn white supremacists at the first presidential debate.

First of all, the question itself, from moderator Chris Wallace, was absurd: Trump has condemned white supremacists repeatedly.

Asking him to condemn them (the “again” was never acknowledged) — and refusing to accept Trump’s assurances — was both ill-informed and inflammatory.

Four things are clear from the transcript below:

The transcript, amid the crosstalk, reveals the truth (emphasis added):

Wallace: You have repeatedly criticized the vice president for not specifically calling out Antifa —

Wallace: — and other left-wing extremist groups. But are you willing, tonight to condemn white supremacists and militia groups —

Wallace: — and to say that they need to stand down and not add to the violence in a number of these cities as we saw in Kenosha, and as we’ve seen in Portland.

Trump: Sure, I’m willing to do that.

Wallace: Are you prepared specifically to do it.

Trump: I would say —

Trump: I would say almost everything I see is from the left wing not, not from the right wing.

Trump: I’m willing to do anything. I want to see peace.

Trump: Go ahead. Who would you like me to condemn?

Biden: His own — his own FBI director said —

Biden: — the threat comes from white supremacists. Antifa is an idea, not an organization.

Trump: Oh, you gotta be kidding.

Biden: Not militia. That’s what his FBI —

The worst that Trump can be accused of is trying to change the subject — which he was entitled to do, given the faulty premise of the question. No matter how many times Trump condemns white supremacists, the media pretend he never did.

It is simply untrue to claim that Trump refused to condemn white supremacists, or that he tried to encourage them by telling them to “stand by.” Claims to the contrary rely on deceptive edits that omit what Trump, Wallace, and Biden actually said.