A Phoenix resident got an unwelcome surprise recently in the shape of a large western diamondback rattlesnake.

Snake removal firm Rattlesnake Solutions was called in to deal with the venomous reptile after its discovery in an apartment in the North Phoenix, Cave Creek area.

“Most of the time that we respond to a ‘rattlesnake in the house!’ call, it ends up being a Nightsnake. Not this time …,” explained Rattlesnake Solutions, in a Facebook post. A photo posted to Facebook shows the snake as it was found, curled up under a bed.

Western diamond rattlesnakes account for more human bites than any other rattlesnake in the American southwest, according to the National Park Service. 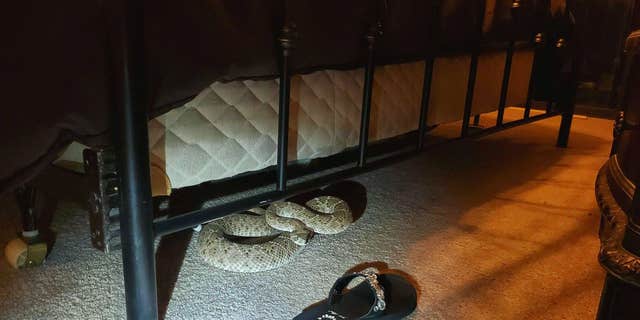 The rattlesnake was curled up under a bed. (Rattlesnake Solutions)

In a blog post, Rattlesnake Solutions noted that the snake was quickly and safely captured, and explained how the rattlesnake got into the apartment.

“It turns out that the resident left the home for less than 5 minutes, leaving the door slightly ajar,” the company explained. “That’s all the time it takes for a wandering rattlesnake to find the cool, air-conditioned ‘cave’, and slip inside.”

However, the snake removal specialist noted that incidents such as this are relatively rare. Of more than 10,000 individual encounters Rattlesnake Solutions has had with snakes, less than 100 have been with rattlesnakes inside the home. “If you remove homes that were previously abandoned, missing entire walls, or in a condition where they should be condemned … you end up with fewer than 40,” it said.

“The best way to keep rattlesnakes out of your home is to keep doors closed and eliminate access, down to a 1/4″ space,” Rattlesnake Solutions added in the post.