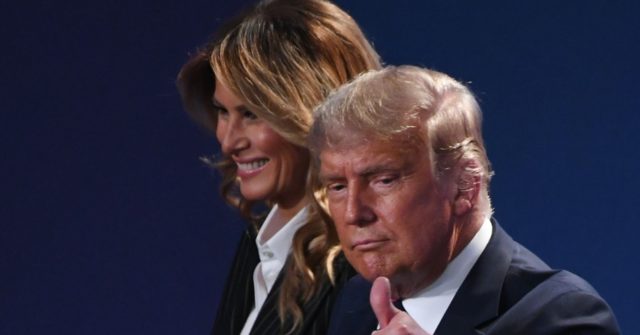 The corrupt national media are not demanding the two remaining presidential debates be canceled because they believe Joe Biden wiped the floor with Donald Trump.

The corrupt national media are not demanding the two remaining presidential debates be canceled because they believe the spectacle of all the norm-violating that occurred Tuesday night is bad for democracy. This is the same media out there encouraging riots, looting, arson, and assault.

The corrupt national media are not demanding the two remaining presidential debates be canceled because this one made children — LOL — cry.

No, the corrupt national media want the two remaining presidential debates canceled because they know Trump won and Biden lost.

Listen, Trump’s always going to be Trump. If people haven’t figured that out by now, they never will. He’s just going to be who he is, and who he is is a president who doesn’t give a mouse turd about norms, because he knows the norms are all rigged by the fake media to benefit Democrats.

Trump knew Chris Wallace would stand in Biden’s corner to help hold him up, would ask questions of Trump that put Trump on defense and questions of Biden that would allow Biden to look like a moderate, so Trump did what he had to do to remind voters Biden is a racist, a liar, and a dummy.

Trump knew Biden’s debate tactic is to laugh and interrupt and heckle, like he did to Paul Ryan during their 2012 vice presidential debate, so Trump beat him to the punch.

Trump knew Chris Wallace would allow Biden to lie about things like the “Very Fine People Hoax,” so Trump let him have it, and if that meant Trump had to interrupt with questions Chris Wallace was too corrupt to ask, so be it.

Trump knew presidents running for re-election always blow their first debate (Reagan in ’84, George H.W. Bush in ’92, George W. Bush in ’04, Barry Obama in ’12) always look like they are caught in headlights after being shoved out of the presidential bubble, so Trump arrived loaded for bear and full of energy and fight.

Trump’s game plan is never about being something he’s not, is never about stupidly stepping into the “norm trap” that allows Joe Biden to get away with laughing and heckling and interrupting while Trump loses to a separate set of rules that require he be steamrolled as he tries to appear presidential.

No, Trump’s game plan is always, always, always to drag the other guy into the sun and expose him for what he is, and that’s what he accomplished last night.

There are three impressions that will stick in a couple of days, and they all benefit Trump.

Most of all, Trump got Biden to repudiate the Green New Deal (something Biden’s own website says he supports), which will hurt him with the enthusiasts he needs on the left.

He got Biden to dismiss Bernie Sanders. Huge error. Huge.

He also got Biden to admit he’s going to raise taxes on the middle class.

Biden said that last night, and that means your standard deduction and child tax credits that the Trump cuts nearly doubled will be slashed in half.  So if you’re married and your federal tax rate is, say 20 percent, you’re going to pay 20 percent on about $12,000 in income you weren’t under Trump’s tax cuts. That’s a $2400 tax increase. Just is.

Without any caveat last night, Biden straight up said he would repeal the Trump tax cuts. Trump cut taxes for everyone, so Biden intends to hit everyone with a tax increase.

Finally, Trump did a brilliant job sounding the alarm about the coming catastrophe and left-wing corruption involved with mail-in voting.

It wasn’t pretty, but Trump won.

P.S. It’s also why the media are lying about Trump refusing to condemn white supremacists.