Australian Navy divers have removed an unexploded 45-kilogram (100-pound) bomb on a reef off the southeastern coast and a ship towed it to deeper waters because it posed a “significant risk” to the public.

The bomb was found by a fisherman on Elizabeth Reef near Lord Howe Island, about 550 kilometers (340 miles) off New South Wales state. He photographed his discovery and reported it to authorities.

Divers aboard the HMAS Adelaide carefully removed the abandoned explosive by floating it to the surface and towing it farther out to sea, where it was dropped into 550-meter (1,800-foot) deep waters. 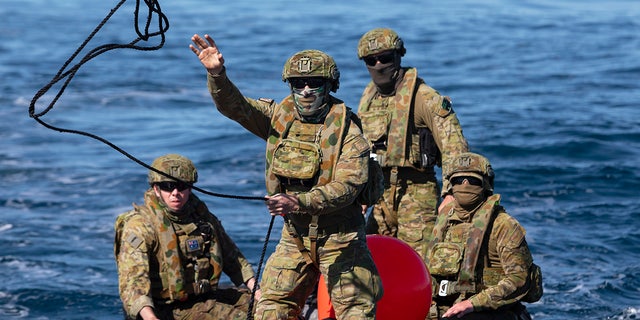 In this Sept. 25, 2020, photo provided by the Royal Australian Navy, members of the Australian Clearance Diving Team One return to Lord Howe Island, Australia, from Elizabeth Reef on a Zodiac inflatable boat following a successful search for unexploded ordnance. The 45-kilogram (100-pound) bomb was found by a fisherman on Elizabeth Reef near Lord Howe Island, about 550 kilometers (340 miles) off New South Wales state. (ABIS Sittichai Sakonpoonpol/Royal Australian Navy via AP)

PRO-SURFER IN AUSTRALIA HAS CLOSE CALL WITH ‘DANGEROUS SHARK,’ BEACH SHUT DOWN

Although there was no date given for the bomb removal, the Australian Department of Defense photos were dated Sept. 25.

“That depth is really safe. It’s not going to ever get washed back up onto the reef,” Senior Marine Parks Officer John Pritchard said. “There’s no deep-sea fishing or trawling allowed out there. It’s a recreational fishing zone only. The chances of that UXO (unexploded ordinance) ever coming back to the surface is negligible.”

The origin of the bomb is not known and divers couldn’t estimate its age because of its deterioration, a spokesman for Environment Minister Sussan Ley said.

Bombs of that size were used as long ago as World War I, sometimes dropped from aircraft to target submarines. There were also bombings off the Australian east coast during World War II. 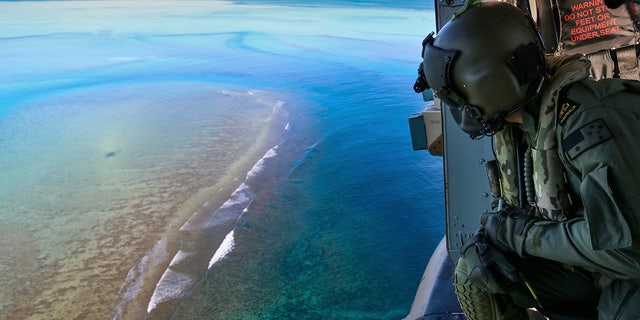 In this Sept. 25, 2020, photo provided by the Royal Australian Navy, Leading Seaman Daniel Atkins looks out over Elizabeth Reef in search of unexploded ordnance on an MRH-90 helicopter from HMAS Adelaide. The 45-kilogram (100-pound) bomb was found by a fisherman on Elizabeth Reef near Lord Howe Island, about 550 kilometers (340 miles) off New South Wales state. (Sgt. Jake Sims/Royal Australian Navy via AP)

Ley said the fisherman and navy divers had potentially saved lives, as well as one of Australia’s most important reefs.

“The device was regarded as live by the navy and the consequences could have been quite frightening,” Ley said in a statement on Sunday. “Thankfully the reef’s precious ecosystem is safe and most importantly so are future visitors.”

Elizabeth Reef is about 160 kilometers (100 miles) north of World Heritage-listed Lord Howe Island. Along with nearby Middleton Reef, Pritchard said it is the southernmost coral reef platform in the world.

“There’s been 125 corals identified there (and) over 300 species of fish,” Pritchard said. “It’s quite a unique environment and, because it’s so far from anywhere, it’s relatively untouched.”