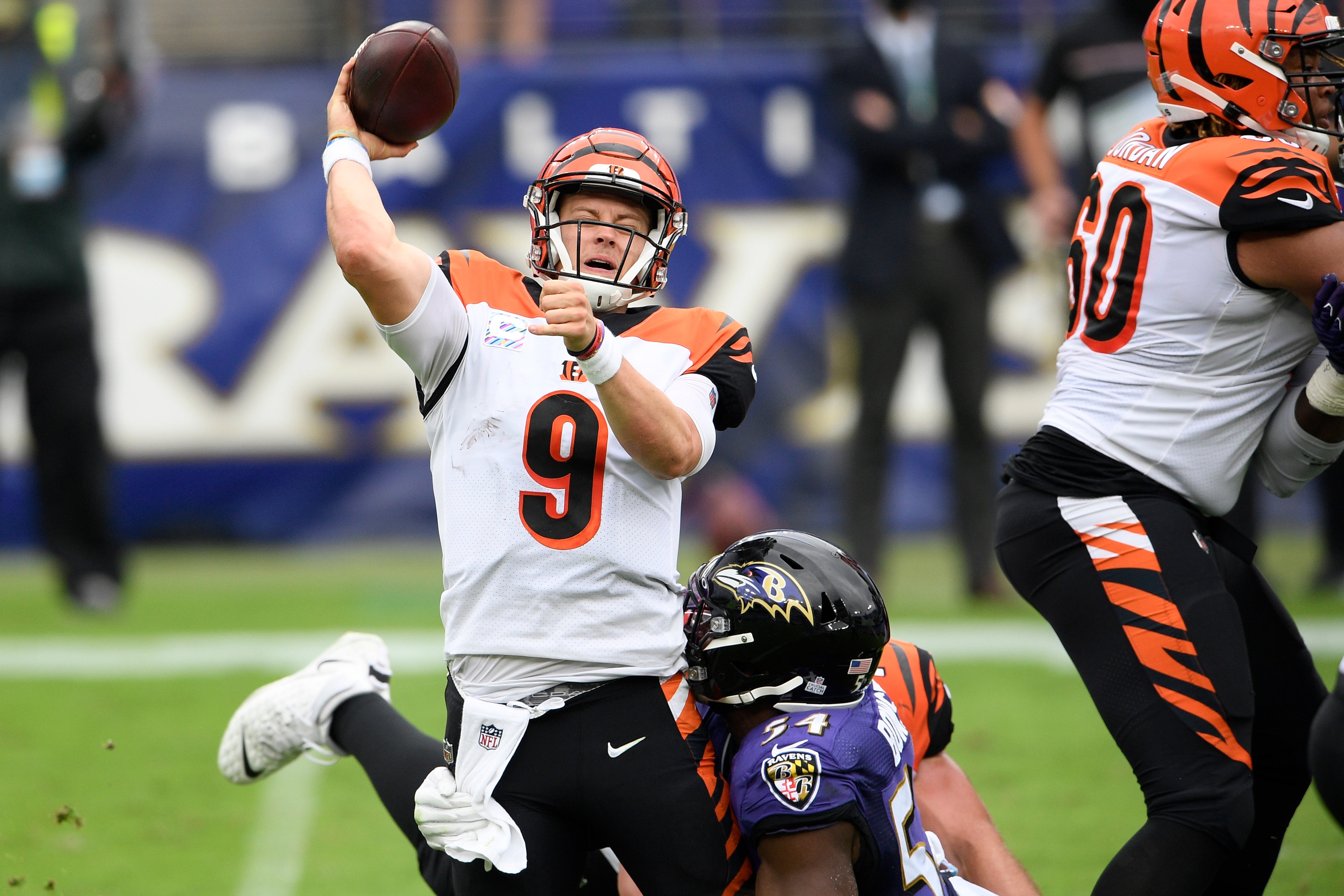 The Baltimore Ravens have grown accustomed to winning with a strong running game and the remarkable skill of versatile quarterback Lamar Jackson.

They took a different approach against the Cincinnati Bengals on Sunday, carving out a 27-3 victory with the kind of defensive performance that once defined the franchise.

Baltimore’s stout effort was punctuated by Patrick Queen’s 52-yard fumble return in the fourth quarter. It was the first NFL touchdown for Queen, who played with Burrow last year for national champion LSU.

Burrow was the No. 1 overall pick and Queen was No. 28. Now both are starters, and Queen is flourishing at middle linebacker, the position once manned by Hall of Fame member Ray Lewis.

“I knew when I got drafted and Joe got drafted that we were going to be seeing each other twice a year,” Queen said. “So it’s the start of a great rivalry, and I’m glad I got the first win out of it.”

Jackson wasn’t particularly sharp, but it didn’t really matter. The 2019 NFL MVP went 19 for 37 for 180 yards and two touchdowns with an interception.

“You start with the defense,” coach John Harbaugh said. “The defense played lights out the whole game, and that was fun to watch.”

The last time the Ravens opened 4-1 was 2012, when they ended up winning the Super Bowl.

Burrow entered with three straight 300-yard passing games — a record for a rookie. In this one, he looked every bit like a first-year player going up against a skilled unit intent upon ending that streak.

“We knew we couldn’t give up 300 yards passing like he’s been doing,” Queen said.

Burrow completed 19 of 30 passes for 183 yards, threw an interception and lost a fumble.

“We didn’t execute our plan very well. I didn’t play very well,” he conceded. “I consider myself a playmaker, and I didn’t make any today.”

It wasn’t all his fault, because the Cincinnati offensive line had all sorts of problems trying to contain the blitzing, stunting, charging Ravens.

Burrow has been sacked 22 times in five games, and this wasn’t even the worst. He was sacked eight times in Philadelphia.

“Holding Mixon low on the rushing, that’s a big heavy duty task and we did a good job at that,” Harbaugh said.

After amassing 505 yards against the Jaguars, Cincinnati could muster only 205 yards — much of it in the fourth quarter when the outcome was already decided.

A field goal with 32 seconds remaining enabled the Bengals to avoided being blanked.

The Ravens got a field goal on their opening possession after rookie receiver Devin Duvernay ran around left end for 42 yards.

Cincinnati then failed on a fourth-down try, and Baltimore moved 62 yards the other way for a 10-0 lead. Jackson completed two third-down passes to Andrews before capping the drive with a short touchdown pass to his reliable tight end.

Minutes later, Burrow hurried a third-down pass under pressure and was picked off by Marcus Peters, setting up a 2-yard touchdown pass to Brown.

Cincinnati’s next possession ended when Queen stripped Burrow and recovered the fumble near midfield.

It was 20-0 in the fourth quarter before Marlon Humphrey dislodged the ball from receiver Mike Thomas and Queen scooped up the fumble and rambled down the right sideline.

The Ravens have forced a turnover in 18 straight games, the longest active streak in the NFL and second-longest in franchise history. Baltimore has 32 takeaways during the 18-game run, including six by Peters (5 INTs and 1 fumble recovery).

Since Jackson became the starter in Week 11 of the 2018 season, Baltimore has scored at least 20 points in 28 straight regular-season games. That ties the 1999-2000 Rams for the second-longest such streak in NFL history.

The Bengals stood in a straight line in front of their bench during the Star-Spangled Banner. As they have done the entire season, the Ravens offered up a mixed response: Most stood, some took a knee and a few sat on the bench.

Bengals: DT D.J. Reader was carted from the field in the third quarter with a left knee injury. … WR A.J. Green missed most of the second half with a hamstring injury. … DT Sam Hubbard departed with a left elbow injury.

Ravens: LB Otara Alaka missed the second half with a knee injury.

The Bengals travel to Indianapolis next Sunday, looking to beat the Colts for the third year in a row.

The Ravens travel to Philadelphia, their last game before taking a rescheduled bye on Oct. 25.