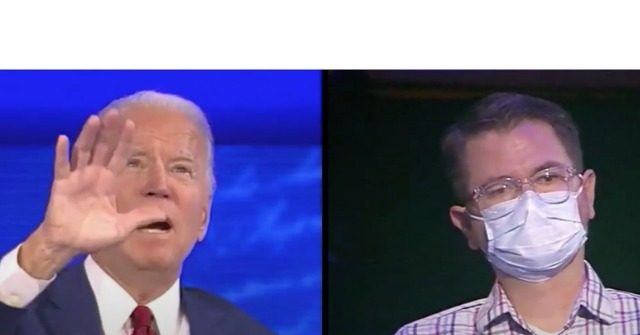 Two of the questioners at Joe Biden’s (D) Thursday town hall have ties to prominent Democrats, including a man who served as a speechwriter in former President Barack Obama’s administration.

Biden and President Trump participated in dueling town halls Thursday evening. While moderator Savannah Guthrie made waves by arguing with Trump throughout his event, Biden’s town hall appeared to be less intense as he fielded questions from a friendly moderator and socially-distanced attendees.

However, organizers did not appear to be entirely forthcoming on the identities of at least two of the town hall attendees, who have connections to high-profile Democrats:

Hey @abc, how on earth could this happen?!

Biden town hall attendee Nathan Osburn is actually a former speechwriter who worked in the Obama White House. As Fox News reported, Osburn “specifically worked for the Office of Public Affairs at the Commerce Department under the Obama-Biden administration and at the Small Business Administration.” During the town hall, he asked Biden about court packing, citing ideas from former Mayor Pete Buttigieg and “others” on putting in place “safeguards that will help ensure more long-term balance and stability.”

“And what do you say to LGBTQ Americans and others who are very worried right now about erosions of their rights and our democracy as a whole?” he asked.

Once again, the former vice president did not offer a definitive answer on if he would pack the court as president:

Osburn was quoted in the Philadelphia Inquirer earlier this year as “a former Obama administration speechwriter” who had created a “Philly for Pete group” aimed at boosting former Democratic presidential primary candidate Pete Buttigieg. And the LGBTQ Victory Institute listed Osburn as a senior speechwriter for the Small Business Administration in an article praising the Obama-Biden administration for its LGBTQ hiring practices.

Additionally, Biden took a question from Mieke Haeck, who identified herself as the “proud” mother of a transgender girl. Her occupation was listed as a “physical therapist.” However, she is also the wife of Pennsylvania Democrat Ezra Nanes, “who in 2018 ran a campaign challenging Republican state Senate Majority Leader Jake Corman.” Fox News added that Nanes serves as “an at-large member of the Centre County Democratic Committee.”

Haeck ultimately asked Biden how he would “reverse” the Trump administration’s “dangerous and discriminatory agenda and ensure that the lives and rights of LGBTQ people are protected under U.S. law.”

“I will flat out just change the law,” Biden said:

“Our children and I are so proud of our @MiekeHaeck for her courage in asking this question of @JoeBiden and so grateful to our next President for his caring and decisive answer in support of transgender and all LGBTQ people,” Nanes wrote following his wife’s question:

Our children and I are so proud of our @MiekeHaeck for her courage in asking this question of @JoeBiden and so grateful to our next President for his caring and decisive answer in support of transgender and all LGBTQ people. https://t.co/zvDlO9c2Tl

During the town hall, Biden admitted that his 1994 crime bill was a “mistake” and told a voter that he “does not propose banning fracking,” despite indicating otherwise in the past.