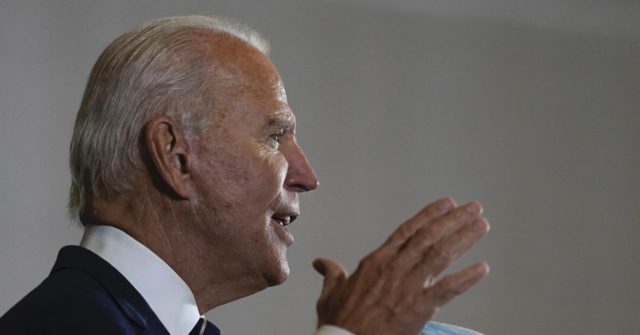 Biden cited Trump’s “words,” though there is no evidence yet tying the suspects to Trump.

One of the militia’s members, Brandon Caserta, had indicated a sympathy towards anarchists and had accused numerous elected officials of being “tyrants,” including Trump.

The former vice president, who has made restoring the “soul of the nation” a cornerstone of his White House run, blamed Trump for the Whitmer plot last week, and made the claim again during a campaign swing Friday through Michigan.

Speaking in Southfield, a suburb of Detroit, Biden told the audience that recent revelations that eight domestic terrorists had planned to kidnap the state’s governor should “shock the conscience.”

“It’s the sort of behavior you might expect from ISIS,” Biden said. “It should shock the conscience of every American, every American, and the failure to condemn these folks is stunning from the outset.”

Arguing that “words matter,” especially those coming from a president, Biden suggested that Trump’s rhetoric surrounding the novel coronavirus pandemic had encouraged the anarchists, a number of whom targeted Whitmer because of her response to the outbreak.

“When the president tweeted ‘Liberate Michigan’ that’s the call that was heard,” Biden said. “That was the dog whistle.”

Earlier this month the Federal Bureau of Investigation (FBI) arrested eight individuals for planning to kidnap Whitmer at her vacation home. The eight men were all members of a militia group, called the Wolverine Watchmen, and had planned to not only kidnap the governor, but also storm Michigan’s state capitol.

A number of the men arrested had previously taken part in protests against coronavirus restrictions across Michigan and much of the Midwest.

The FBI’s criminal complaint on the matter states that members of the group had hoped their efforts would lead to “a society that followed the U.S. Bill of Rights and where they could be self-sufficient.”