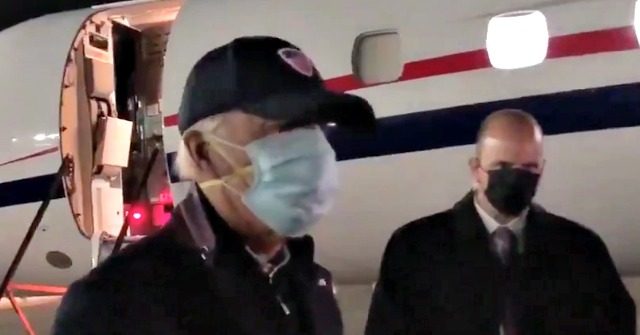 When Biden was leaving Michigan Friday night, CBS Reporter Bo Erickson asked him about the story claiming Hunter introduced Vadym Pozharskyi, an adviser to Burisma, to then-VP Biden – who was in charge of U.S. policy towards Ukraine – in 2015.

Hunter was also serving on the board of Burisma when the alleged meeting took place, and he was getting paid tens of thousands of dollars each month.

“I know you’d ask it. I have no response. It’s another smear campaign, right up your alley, those are the questions you always ask,” Biden replied, sounding annoyed.

CBS Reporters Ed O’Keefe and Paula Reid came out in defense of their colleague for questioning the Democrat presidential nominee, who rarely speaks to the press.

It’s our job as journalists to ask questions of people in power or who want to be in power — whether they like the questions or not.

Biden adopts Trump playbook – attacking pool reporter @BoKnowsNews for asking about Hunter Biden story which has been a focus of President Trump’s campaign over past few days. Fine to attack the story, but why personally insult Bo? https://t.co/PgOsLgu2DT

Although the Biden campaign has denied that the former VP ever met Pozharskyi officially, it has not denied ever meeting the man.

“We have reviewed Joe Biden’s official schedules from the time and no meeting, as alleged by the New York Post, ever took place,” Biden campaign spokesman Andrew Bates said in a statement, Politico reported Wednesday.

“Biden’s campaign would not rule out the possibility that the former VP had some kind of informal interaction with Pozharskyi, which wouldn’t appear on Biden’s official schedule,” Politico added.

Senior Biden advisers, including Michael Carpenter and Amos Hochstein, who served the former VP at the time of the meeting, also said that Biden might have met the Burisma executive in an unofficial capacity.

Hunter’s work for Burisma between April 2014 and April 2019, while his father served as vice president, raised eyebrows among some Obama-era officials who saw it as a conflict of interest.

The VP’s son serving on the Burisma board was at the center of the Democrat efforts to remove U.S. President Donald Trump from office during the impeachment proceedings.

Former VP Biden has claimed he never spoke to Hunter about his business dealings overseas.

Biden is a liar who has been ripping off our country for years! pic.twitter.com/eQCfTaO546

Former VP Biden has also denied any Burisma-related conflict of interest or wrongdoing by him or his son despite members of the Obama administration warning that it looked terrible that Hunter was working at a Ukrainian company that U.S. officials believed to be corrupt.

In an ABC News interview, Hunter himself admitted that his father’s political position helped him secure the lucrative appointment to Burisma’s board of directors.

The senior Biden boasted in 2018 about threatening to withhold $1 billion in U.S. loan guarantees to Ukraine as VP in 2016 if the Eastern European country did not fire its top prosecutor, who wanted to investigate the owner of Burisma for corruption.