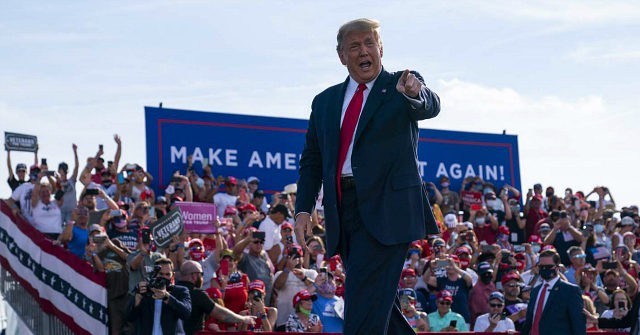 President Donald Trump pointed out to supporters Friday night at a campaign rally in Macon, Georgia, what he and his administration have done for the black community in America.

As the U.S. Economic Development Administration (EDA), a bureau of the U.S. Department of Commerce, explains, an Opportunity Zone is “an economically-distressed community where private investments, under certain conditions, may be eligible for capital gain tax incentives.”

Opportunity Zones were created under the 2017 Tax Cuts and Jobs Act, which Trump championed and signed into law three years ago. They encourage economic development and job creation by incentivizing investments in low-income areas. Investors can defer tax on any prior gains invested in a Qualified Opportunity Fund until the date on which the investment is sold or exchanged, whichever is earlier, until the end of 2026.

The president also discussed his support for Historically Black Colleges and Universities (HBCUs) and setting their funding for a ten-year period.

In addition, Trump has pledged to support school choice and, as he said in Georgia, Joe Biden, who is backed by the teachers’ unions, opposes it.

Black Americans, however, have been strong supporters of school choice and have drifted from the Democrat Party and Biden in this key area.

“When we divert public funds to private schools, we undermine the entire public education system,” Biden tweeted in January. “We’ve got to prioritize investing in our public schools, so every kid in America gets a fair shot. That’s why I oppose vouchers.”

When we divert public funds to private schools, we undermine the entire public education system. We’ve got to prioritize investing in our public schools, so every kid in America gets a fair shot. That’s why I oppose vouchers. #Espinoza

For the Manhattan Institute survey, questions about school choice were added to Rasmussen’s regular polling of 1,000 likely voters in each of these swing states for presidential and senatorial races.

Among all voters in Ohio, 69 percent support school choice, while 72 percent of black Americans say the same.

In North Carolina, 70 percent of all likely voters support school choice, while 65 percent of black Americans also support the idea.

The Democrat Party’s 2020 platform has also called for greater scrutiny of charter schools, which are publicly funded but privately managed.

“Democrats believe that education is a public good and should not be saddled with a private profit motive, which is why we will ban for-profit private charter businesses from receiving federal funding,” the platform states, and adds Democrats will use “accountability” regulations to ultimately turn charter schools into regular public schools:

In 2012, the Obama-Biden administration stood with teachers’ unions and against low-income parents choosing a private or religious school for their child’s education.

The administration’s 2013 budget eliminated funding for the highly successful D.C. Opportunity Scholarship Program, which allowed many low-income parents living in the nation’s capital to afford to remove their children from failing public schools and send them to a religious or private school.

Supported by the teachers’ unions, the Biden-Harris ticket follows along with the same agenda.

When Sen. Kamala Harris (D-CA) was a presidential candidate, she touted her support for busing during a debate as she criticized school choice policies.

One national poll commissioned by the American Federation for Children in January 2019, found 67 percent of voters support school choice, including 73 percent of Latinos, 67 percent of blacks, and 68 percent of whites.

President Donald Trump and his administration have been ardent supporters of school choice.

In August, during his acceptance speech at the Republican National Convention, Trump pointed to the devastating impact of Biden’s opposition to school choice, particularly on children of minority families.

“Biden … vowed to oppose school choice and close down charter schools, ripping away the ladder of opportunity for black and Hispanic children,” the president said, adding that, if elected to a second term, he will “expand charter schools and provide school choice to every family in America, and we will always treat our teachers with the tremendous respect they deserve.”