When Hurricane Delta was heading towards the Yucatan Peninsula in Mexico earlier this month, Ricardo Pimentel opened his home to cats, chicks, bunnies, a flock of sheep and even a hedgehog.

On top of all that, he also brought in about 300 dogs.

Though they may not have been the best roommates — he said the house smelled terrible — it was worth the move because they all survived the storm.

“It doesn’t matter if the house is dirty, it can be cleaned,” Pimentel said. “The things they broke can be fixed or bought again, but what’s beautiful is to see them happy, healthy and safe, without wounds and with the possibility of being adopted.”

Pimentel runs the Tierra de Animales — which means Land of Animals — shelter near Leona Vicario, Mexico, which he founded almost 10 years ago. 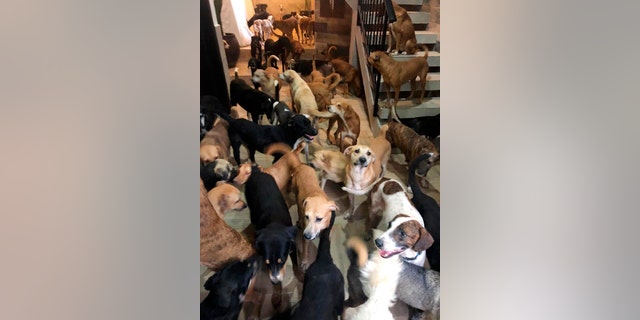 When Hurricane Delta was on its way to the area, he prepared the shelter by boarding up windows. On Oct. 6, the Tierra de Animales posted on Facebook asking for donations to buy enough food and supplies for all of the animals, so that he could buy what he needed in case the storm shut down stores.

“If I lived with just 10 or 20 dogs, I wouldn’t worry much, but here we have hundreds of animals and we can’t afford the luxury of not having enough food,” Pimentel said.

Meanwhile, the staff at the shelter were bringing all the animals indoors, leading the dogs into his house by a leash, to keep them all safe from Hurricane Delta. 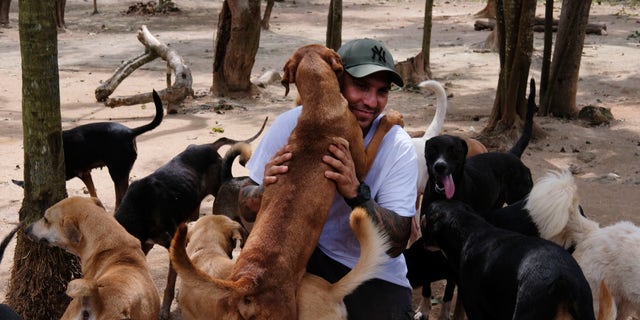 Ricardo Pimentel is greeted by dogs that he rescued at his Tierra de Animales shelter in Leona Vicario, Mexico, on Oct. 13.  (AP Photo/Luis Andres Henao)

However, because of all the preparations ahead of the storm and the aftermath — which included downed trees and knocked out power — Pimentel didn’t realize that a picture he had posted online of the dogs had gone viral.

People from around the world donated thousands of dollars to Tierra de Animales and he said it was perhaps the biggest fundraising moment since he founded the shelter.

He also said that local residents have volunteered to clean up the damage at the shelter caused by the hurricane.

“We would like to think that thanks to all this attention, somebody would like to be part of the story and say: ‘I adopted a dog saved from that famous Hurricane Delta,’” Pimentel said.

Pimentel started Tierra de Animales in 2011. Today, he and his staff care for about 500 animals on the shelter’s 10 acres of land.