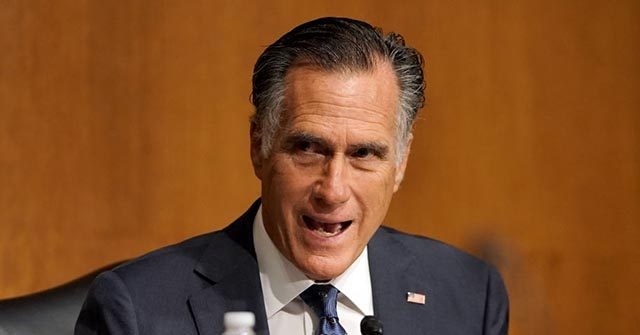 “The President’s unwillingness to denounce an absurd and dangerous conspiracy theory last night continues an alarming pattern: politicians and parties refuse to forcefully and convincingly repudiate groups like antifa, white supremacists, and conspiracy peddlers,” Romney said in a Friday statement.

“Similarly troubling is their silence regarding anti-vaxxers militias, and anarchists,” he continued, accusing such politicians of coddling and adopting the “rabid fringes” while “eagerly trading their principles for the hope of electoral victories.”

“As the parties rush down the rabbit hole, they may be opening a door to a political movement that could eventually eclipse them both,” he added:

During Friday’s town hall forum in Miami, Guthrie, who made waves after consistently arguing with the president, demanded Trump to condemn QAnon. The theory centers around anonymous tipsters — believed to be connected to the administration — who drops clues on Trump’s purported war against the Deep State, “which is comprised of politicians, business executives, and Hollywood elites who abuse children and practice Satan worship,” as Breitbart News reported.

“Let me ask you about QAnon. It is this theory that Democrats are a satantic pedophile ring and that you are the savior of that. Now can you just once and for all state that that is completely not true and disavow QAnon in its entirety?” Guthrie asked.

“I know nothing about QAnon,” Trump said.

“I just told you,” Guthrie quipped.

“Why not just say it’s crazy and not true,” she pressed.

“He may be right. Can I be honest? He may be right I just don’t know about QAnon,” he said as Guthrie continued to interrupt, insisting that he did know.

“No, I don’t know that, and neither do you know that,” Trump said, asking Guthrie why she had not asked him about the radical left — Antifa, specifically.

“Antifa exists. They’re vicious. They’re violent. They kill people, and they’re burning down our cities and they happen to be radical,” he added:

Guthrie’s question came on the heels of Big Tech’s attempts to quash the theory. In July, Twitter blacklisted thousands of QAnon accounts. In August, Facebook removed both QAnon and Antifa groups and followed up earlier this month with banning all accounts related to QAnon from its platform. YouTube followed suit this week, barring all content related to the QAnon theory, removing “tens of thousands of QAnon-videos” and terminating “hundreds of channels under our existing policies.”

Notably, a Morning Consult survey released this week indicated that Democrats are more aware of the theory than Republicans. Thirty-two percent of Democrats said they have heard “a lot” or “some” about QAnon, compared to 25 percent of Republicans who said the same.