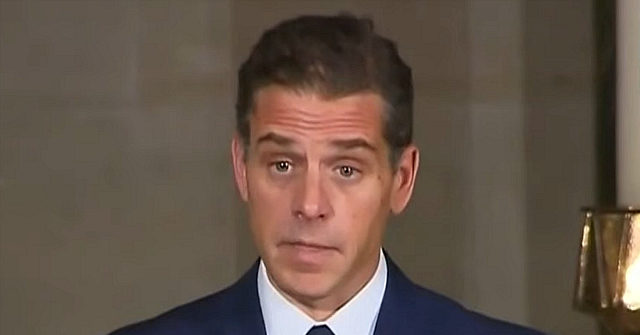 Schweizer, appearing on Breitbart News Saturday on SiriusXM 125 the Patriot Channel, said that former Hunter Biden business partner Bevan Cooney provided 26,000 emails to him—the first of which were published late last week in a Breitbart News exclusive investigation by Schweizer and author Seamus Bruner. Cooney is currently serving a sentence in federal prison due to his conviction over financial deals he made connected to Hunter Biden and his other partner Devon Archer. Archer, who was also convicted by a jury in federal court, saw his conviction vacated by a federal judge. That conviction was later—just a couple weeks ago—reinstated by an appellate court, which overruled the lower court judge’s decision to vacate it. Archer awaits sentencing.

In the meantime, however, Cooney—who is serving his sentence in federal prison—reached out to Schweizer via conservative journalist Matthew Tyrmand and provided written authorization to access his Gmail account. He provided the password and username, and written authorization to publish emails because Schweizer says he believes he was the “fall guy” for the Biden family’s corruption and that he believes the public needs to know what really happened in Hunter Biden’s universe. The first article on these emails was published Friday afternoon, and detailed how Hunter Biden and his partners secured meetings with senior White House officials in November 2011 for Chinese Communist elites—including, as the Chinese elites who were present revealed, a secret meeting with then-Vice President Joe Biden himself. The Biden campaign has not responded to requests for comment about this from Breitbart News.

“Bevan Cooney was business partners with Hunter Biden and Devon Archer,” Schweizer said on Breitbart News Saturday. “He was a nightclub owner—he owns the Viper Room in Los Angeles, and got involved in these financial deals. He ended up going to jail and really feels that he was the fall guy. Devon Archer is now going to be going to jail as well, because of the same deals, but he [Cooney] really feels like Hunter Biden was able to walk off scot-free. He had reached out to me in 2019 after my book Secret Empires came out in 2018. He talked about sharing his emails, but it never happened. He ended up going to jail. He recently reached out through Matt Tyrmand, a journalist, and said I want to give you access to all of my emails in my Gmail account. He gave us written approval to do that, and gave us the password. We have been going through the 26,000 emails. The article that we ran on Breitbart, about China, Inc., is the first of what are going to be several. In this particular story what we lay out is how Hunter Biden and his business partners set up a meeting for this group called the China Entrepreneurs Club. Don’t let that benign name fool you; this is regarded as joined at the hip with the Chinese communist government. This China Entrepreneurs Club wanted meeting at the highest levels of the White House and Hunter Biden arranged them. What’s very curious about this is not only that they got these meetings on November 14, 2011, but they actually, according to members, had a private, secret meeting with Joe Biden himself. We don’t know about this because it appeared on the White House visitors logs or the White House calendar—it doesn’t. We know about it because the Chinese that were on that trip bragged about it in their blog posts back in China that they had this private, secret meeting with Joe Biden. Out of that sprang relationships and business deals that Hunter Biden and his business partners were apparently able to take advantage of, so it demonstrates how this access, with the participation of Joe Biden, translated into commercial deals down the road.”

Schweizer said this first round of emails published late last week—only a handful of the 26,000 obtained—is just the beginning. There are more, he said, including ones that further illustrate the relationship between Hunter Biden and the ex-wife of the former Moscow mayor Yelene Baturina—a payment from her to Hunter Biden was a major revelation in a recent U.S. Senate report on the Biden family corruption—as well as a clearer, more vivid description of just how the Bidens worked to develop a system to use Joe Biden’s position in government to enrich themselves.

“The emails, there are different types of emails,” Schweizer said. “Many of the emails are the business partners discussing, without Hunter’s participation, what Hunter’s role is in all of this. What’s very clear, and we will have reporting on this at Breitbart, what’s very clear is Hunter brings no money to the table. But he is considered the avenue to the administration. There are emails that talk about how they are going to do business deals where they want to get union pension money and that Hunter is going to leverage the relationships that his dad has with public employee unions to get that money. So part of it is just kind of a feel for what is the Biden business model, and we kind of knew this in a way but here it’s very explicit that it is trading off the Biden name, the Biden connections, and the Biden access. The other way I would categorize this is geographical. The one we have already broke was a story related to China. There are other emails involving China. The private equity deal—the billion and a half dollar private equity deal—that we’ve reported on. There are emails concerning that, which we will bring out which are quite interesting. There are ones that pertain to Yelena Baturina, she’s the Moscow mayor’s ex-wife who we should add the U.S. State Department has implicated as being tied with Russian organized crime. We’re going to be able to show that that relationship is much deeper and much longer than previously known and that Hunter Biden and his business partners performed various services for her in terms of deals in the United States. And then there are other geographical areas covered. There are deals involving Kazakhstan. There are deals in other parts of the world. There are references to Hunter Biden’s dealings in the Middle East. So there’s quite a bit of material there—26,000 emails, some of them obviously are personal. We’re not going to disclose anything that is personal. It’s all going to be business-related, but we’ll be rolling it out in the days ahead.”

“What you’re really seeing in these emails is the underbelly of how these relationships and corrupt deals happen,” Schweizer said. “There’s no question about that, and that’s one of the things I think people are going to get. They’re going to get an inside look because as we are doing—we did on the first story and we’ll do it on all of them, we’re not just going to be reporting on the emails. We’re actually going to place the emails up so people can read them themselves. To your point, to underline your point, yes these are totally separate from the New York Post emails. I don’t have access and have not had access to those emails and what we are dealing with in our case is—you’re exactly 100 percent right. These are not printouts, these are not PDFs—we actually go into the Gmail account and pull the emails out and download them. They are timestamped. These are real. These are genuine. That’s one of the reasons we felt it was so important to pursue this. Cooney is taking a risk because he’s trusting us with this trove of emails which includes personal information. So he’s taking quite a risk in sharing this information but he feels like it needs to get out because people need to understand how these deals were done.”