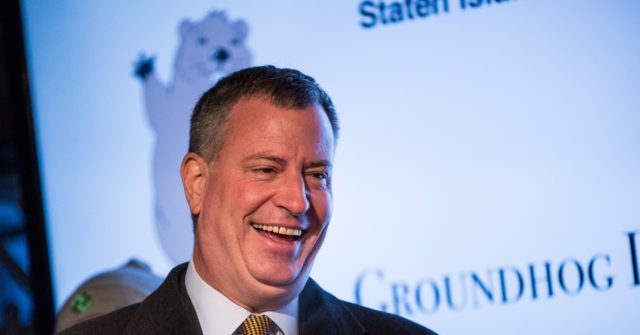 When “social democrat” Bill de Blasio was elected mayor in 2013, he was “anointed … as the standard-bearer for a new progressive movement,” the left-wing magazine The Nation recalled in 2016.

New York under de Blasio was to provide a model for the rest of the nation about what “progressive” or “democratic socialist” governance could look like. And he certainly governed as New York’s “most progressive mayor in decades,” winning re-election in 2017 to a second term.

Today, looking back on the de Blasio era, the lessons of “democratic socialism” in New York are clear. The city has lost thousands of residents due to the coronavirus pandemic — but it was in a downward spiral even before the outbreak. The mayor backed the Black Lives Matter movement, exacerbating a rift in relations with the New York Police Department (NYPD) that once enjoyed the backing of de Blasio’s predecessors, who brought the city’s notorious crime under control.

De Blasio and Gov. Andrew Cuomo supported a state law ending cash bail in New York. Faced with a crime wave, the mayor offered criminal defendants incentives to appear in court, such as gift cards and tickets to watch the New York Mets.

When The Nation endorsed him in 2013, it praised his “commitment to reimagining the city in boldly progressive, egalitarian terms.” He successfully implemented a program of free, universal pre-kindergarten for four-year-olds — his biggest achievement. But de Blasio reinforced what is arguably the single greatest force for inequality: the teachers’ unions. He fought with charter schools and tried — unsuccessfully — to eliminate the entrance exam for the city’s schools for gifted students. Last month, the principals’ union passed a unanimous vote of no confidence in the mayor’s handling of schools.

As his progressive utopia faltered, The Nation suggested “the solution to de Blasio’s problems might lie in even bigger, bolder interventions.” Somehow, the answer to failed government policies is always more of the same (see Obamacare).

In 2019, De Blasio backed the “Green New Deal” proposed by Rep. Alexandria Ocasio-Cortez (D-NY), announcing his support for the plan from the lobby of Trump Tower. He was greeted by protesters chanting, “Worst mayor ever!” Facing growing unpopularity at home, de Blasio launched a presidential campaign — and was dogged by protesters the whole way.

During the coronavirus pandemic, De Blasio infamously encouraged people to go about their business as usual as late as mid-March. Then when he locked down the city, he set up a “snitch line” for people to report infractions by neighbors.

Even more ominously, de Blasio targeted the Jewish community in particular for coronavirus crackdowns. He personally oversaw the breakup of a funeral for a rabbi, then called out the Jewish community, sparking allegations of antisemitism. While he marched with tens of thousands in crowded protests for Black Lives Matter and transgender rights, de Blasio locked shut playgrounds in Jewish neighborhoods. Today, the city and state continue a crackdown on Jewish institutions.

Faced with de Blasio’s failure, even the left has abandoned him. A recent article by Danny Katch in Jacobin magazine attempted to explain “Why Bill de Blasio Is Such a Schmuck.” The answer, as usual, is that he is not progressive enough to trust radical left-wing protest movements. “Bill de Blasio purports to want to change the most unjust policies of twenty-first-century capitalism but is instinctively hostile to the unruly grassroots forces necessary to win those reforms,” Katch wrote.

Those “grassroots forces” are currently out in force, promising if Joe Biden is elected president, they can push him in an even more “progressive” direction.