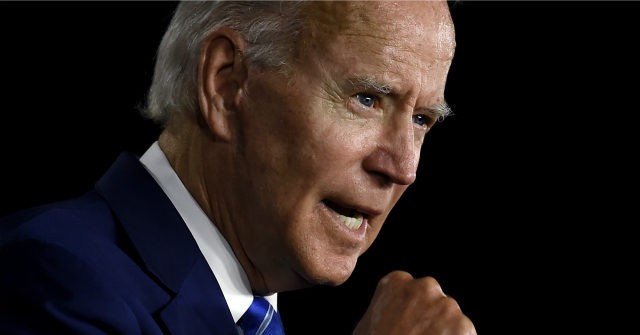 Joe Biden (D) kicked off the week by attempting to rally Democrats around a positive message of finishing the presidential race “strong” — a call that comes after he called a “lid,” remaining off the campaign trail until Thursday’s presidential debate.

Biden’s positive message comes roughly two weeks before Election Day and follows his decision to remain off the campaign trail until Thursday’s presidential debate in Nashville:

The Biden campaign has called a lid until Thursday.

Biden also called a lid last Wednesday, shortly after the New York Post revealed “smoking gun” emails detailing Hunter Biden’s lucrative foreign business dealings and Joe Biden’s alleged involvement. He has largely refused to answer questions about the report and lashed out at CBS reporter Bo Erickson after he asked for a response to the Post‘s story on Friday.

“I know you’d ask it. I have no response, it’s another smear campaign, right up your alley, those are the questions you always ask,” Biden said:

It’s our job as journalists to ask questions of people in power or who want to be in power — whether they like the questions or not.

Biden’s decision to stay off the campaign trail for three days follows a pattern he has established in recent weeks, frequently avoiding the campaign trail. The presidential hopeful spent over a third of September off the trail and kicked off October by following suit:

News: Biden campaign calls a lid for in-person events at 11:20am, per pooler @brittanys.

There’s a virtual fundraiser at 5:00pm.

Meanwhile, President Trump is campaigning with a “vengeance,” as Breitbart News reported, holding two events in Arizona on Monday alone.

The president is expected to hold a rally in Erie, Pennsylvania, on Tuesday and Gastonia, North Carolina, on Wednesday.