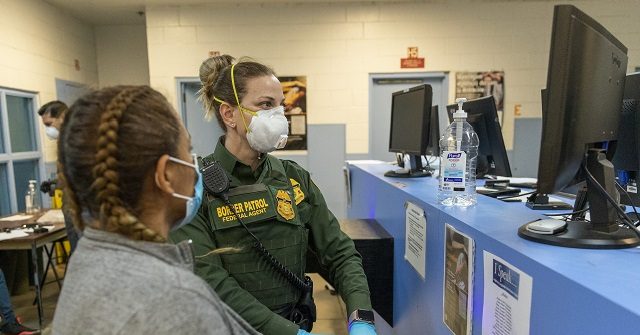 On October 22, in the final presidential debate, Trump said:

The bill that was passed in the House was a bailout of badly run, high crime, Democrat — all run by Democrats — cities and states. It was a way of getting a lot of money — billions and billions of dollars — to the states. It was also a way of getting a lot of money from our people’s pockets to people that come into our country illegally. We were going to take care of everything for them. And what that does — and I’d love to do that, I’d love to help them — but what that does, everybody all over the world will start pouring into our country. We can’t do it. This was a way of taking care of them. This was a way of spending on things that had nothing to do with COVID, as to your question, but it was really a big bailout for badly-run Democrat cities and states.

The bill also provides work permits for a huge number of illegal migrants who have jobs in the very broad category of “essential critical infrastructure.” That category includes janitors and food workers in hospitals, as well as stoop labor in agriculture.

Advocates for the bill lauded the bill’s award of money to illegal immigrants and to the cities that have chosen to rely on illegal migrants’ labor:

“The unemployment rate for undocumented workers reached over 29% in the United States and more than 27% in California, the highest of any demographic group,” said a report by UCLA’s Latino Policy & Politics Initiative. The report, titled “Undocumented During Covid-19,” said:

If President Donald Trump and the Congress were to provide coronavirus checks to illegals as well as citizens, they would support 112,000 jobs in the U.S., 22,000 in California, and 2,000 in LA County … This relief would also result in almost $14 billion in value added to the national economy including $2.6 billion in California and $870 million in Los Angeles.

Nationwide, many advocacy groups are working with Democrats to pass the bailout for local economies that rely on illegal immigration. For example, NACLA.org reported on September 1 how illegal aliens used in New York City were hurt by the disease and crash:

The In Situ study, however, indicates that New York’s Latinx immigrants have experienced unemployment levels (69 percent) more than three times greater than the Latinx population in general. Fewer than one in 10 Latin American immigrant workers have managed to maintain their jobs and regular working hours. Nearly one quarter have seen their hours reduced. Since the vast minority of New York’s Latin American immigrant population is ineligible for temporary cash assistance and unemployment benefits, 56 percent of households report suffering a total loss of income.

The widespread loss of employment and income has had a dramatic impact on household finances. As a result of job losses, nearly 40 percent of Latin American immigrant families reported being unable to cover their basic monthly expenses. In addition, many migrant households lack significant savings. More than 40 percent of families reported having absolutely no savings and only five percent of households had sufficient funds to subsist for more than three months. For many families, lost earnings and limited savings translate into increasing reliance on credit cards and greater debt.

2019 was such a good year for wage earners that per-household income rose by almost 7%, even as wages rose by just a little over 2%.
That won’t happen again if businesses and progressives get to import even more workers. https://t.co/gHlh42iUcd