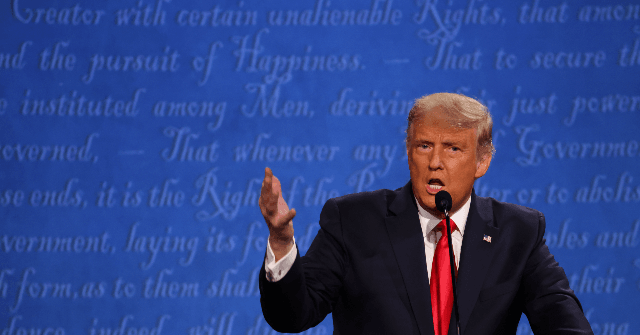 VERDICT: TRUE. U.S. President Trump pushed back against the debate moderator saying the country is heading into a “dangerous” new Chinese virus phase by politely noting that the spike that slammed the United States with record levels of cases and hospitalizations this summer went away.

The U.S. would also overcome the current increase in coronavirus cases and hospitalizations facing the nation, Trump assured.

His comments came in response to the first question by Kristen Welker of NBC News, the debate moderator, who asked:

The country is heading into a dangerous new phase. More than 40,000 Americans are in the hospital tonight with COVID, including record numbers here in Tennessee, and since the two of you last shared a stage, 16,000 Americans have died from COVID. So please be specific how would you lead the country during this next stage of the coronavirus crisis?

As of Thursday evening, the current spike in the average number of new daily infections and, to a much lesser extent hospitalizations, remained below levels reached in the summer, data maintained by the COVID Tracking Project showed.

Before going down, the average number of daily new cases and hospitalizations reached record levels this summer, but deaths remained below peak numbers in April.

This week, Jay Butler, the deputy director for infectious diseases at the U.S. Centers for Disease Control and Prevention (CDC) noted, “Unfortunately, we are seeing a distressing trend here in the United States with COVID-19 [coronavirus disease] cases increasing in nearly 75% of the country.”

In sheer numbers, the U.S. has done more testing than every country except China, data from Worldometer showed on Thursday.

International community experts do not trust data from the virus’s birthplace China, particularly after the communist country hid the extent of the outbreak at its early stages, allowing it to spread.

More tests have allowed officials to detect more cases. The vast majority of people who contract the disease survive, according to the CDC.

Moreover, at least two new peer-reviewed studies reportedly showed a significant drop in the mortality rate among hospitalized patients of all ages, including seniors, the most vulnerable, suggesting that doctors are better at dealing with the disease.